Much of the focus in Wrigleyville over the next two weeks will be on Willson Contreras. That’s perfectly understandable. A career-long member of the organization, Contreras is set to don a Cubs uniform in the All-Star Game for the third (and very likely final) time tomorrow. He’s both one of the few remaining ties to the 2016 World Series-winning team and perhaps the game’s top trade candidate. An impending free agent whom the club hasn’t seemingly made much effort to sign long-term, he’s a virtual lock to be dealt by the August 2 deadline.

Contreras’ trade candidacy is so self-explanatory it has been discussed extensively for months. Yet the future of the other Cub headed to the Midsummer Classic will be equally fascinating to follow. Ian Happ is a first-time All-Star, a deserved National League representative amidst another productive year at the plate. The switch-hitting Happ carries a .274/.364/.443 line across 368 plate appearances through the season’s unofficial first half. By measure of wRC+, that production is 25 percentage points better than league average. 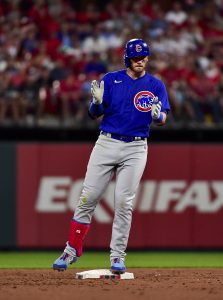 With Happ having held onto his 2019-20 rate production over a three-plus month stretch, one could argue he’s already had a career year in 2022. Perhaps even more importantly, the 27-year-old (28 next month) is getting to those results in a manner that appears more sustainable than he has in prior seasons. Happ’s game has featured quite a bit of swing-and-miss throughout his big league career, but he’s made notable strides in that department. He’s made contact on just under 76% of his swings this year. That’s four points higher than he has in any previous season, and he’s pulled just shy of league average in that regard. He’s paired that with a slightly more aggressive approach, particularly with regards to attacking pitches inside the strike zone.

Even slightly below-average bat-to-ball skills is workable for Happ, who does most other things well offensively. He’s always had solid strike zone awareness, and this season’s 11.4% walk rate is right in line with his career mark. That patience has consistently been paired with above-average power, with Happ posting higher than typical rates of hard contact in each of his six big league seasons. Traditionally, Happ’s power impact has skewed towards his time in the left-handed batters box. That hasn’t been the case this year, though, as he’s collected eight extra-base hits in 85 plate appearances as a right-handed hitter.

A switch-hitter with above-average patience and power and serviceable contact skills, Happ’s a well-rounded and valuable offensive player. He’s not elite, but he’s certainly a good hitter who’d upgrade plenty of teams’ corner outfield situations. Happ is miscast in center field (and on the infield, where he’d logged sporadic innings earlier in his career), but he’s a solid defender in left field. Statcast has pegged him as roughly league average at that position, while Defensive Runs Saved and Ultimate Zone Rating have him a touch above. Left field is far down the defensive spectrum, but Happ’s work at the plate has been plenty sufficient to clear the loftier bar necessary to be a productive regular.

There haven’t yet been substantive reports linking any contenders with Happ, but it stands to reason there have already been clubs in touch with president of baseball operations Jed Hoyer and his front office. The Red Sox, Braves, Twins and Dodgers are among the contenders that have gotten average or worse production out of their left fielders this year. Minnesota and L.A. are currently without their top preferred options (Trevor Larnach and Chris Taylor, respectively) due to injury.

The Blue Jays, Yankees and Padres have gotten solid work from left field but are looking for ways to upgrade their outfields generally. That’s perhaps also true of the Rays, who have Randy Arozarena in left but are expected to be without each of Kevin Kiermaier, Manuel Margot and Harold Ramírez for the foreseeable future. Other clubs like the Mariners, Mets and Guardians have solutions in left field but could look into adding another productive bat with question marks at designated hitter. That’s a broad range of possibilities Hoyer and his staff should be able to explore if they make Happ available this summer.

How motivated will the Cubs be to deal him? Trading Happ isn’t as urgent as moving Contreras will be. The latter is headed to the open market two months from now, while Happ is controllable for 2023 via arbitration. He’s playing this season on a $6.85MM salary, around $2.7MM of which will remain owed after the deadline. He’s sure to land a decent arbitration raise — likely putting next year’s tally in the $10-12MM range — before his first trip to the open market. That’s not an insignificant sum, but it’s still a strong bargain for a player of his caliber. Accordingly, the return package the Cubs receive for Happ is unlikely to ever be better than it will be this summer, when the club can market two playoff pushes to contenders. He’s young enough the Cubs could kick around extension possibilities, but there’s been no public indication that’s on the table.

One way or another, it feels like the appropriate time for the front office to pick a longer-term course of action regarding the former ninth overall pick. Merely holding onto Happ via arbitration doesn’t align with the club’s contention window. The Cubs may not intend to punt on 2023 entirely, but it’s hard to see a path to competitiveness. The team is 22 games under .500 at this season’s All-Star Break, and there are enough holes both at the bottom of the lineup and in the starting rotation they’re unlikely to be completely plugged in one offseason. 2024 feels like the more realistic target for a return to respectability, and Happ is slated to be a free agent by that point.

Unless the Cubs are particularly confident about the chances of getting a long-term deal done with his representatives at WME Baseball, the front office should actively explore the trade market over the next couple weeks. The possibility of dealing him next offseason means Hoyer and his staff don’t need to simply accept the top offer presented, but this feels like the best opportunity for the Cubs to land a marquee return. Happ’s remaining window of club control probably makes him a more valuable trade asset than Contreras, so dealing him may be the organization’s clearest path towards adding another Top 100-caliber prospect to the farm system.

Seeing Contreras and Happ depart in rapid succession would be disappointing to some members of the fanbase, but the organization’s massive sell-off last summer firmly signified this is the direction they’re headed. Plenty more change will be afoot in the next couple weeks, with a host of relievers and the franchise catcher all but assured to be moved. Happ very well might join that group in departing the North Side for a near-term contender as the Cubs continue to restock the minor leagues as part of an ongoing retooling effort.