The Twins have nabbed their second notable arm of the day, acquiring right-hander Tyler Mahle in a trade with the Reds, the teams announced. Cincinnati is receiving infield prospects Spencer Steer and Christian Encarnacion-Strand as well as left-handed pitching prospect Steven Hajjar in the deal. Minnesota has had interest in Mahle dating back to the offseason, when they also picked up another Reds starter, Sonny Gray, in a swap that sent 2021 first-rounder Chase Petty to the Reds. 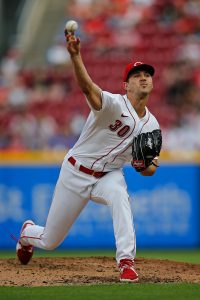 Minnesota has been focused on upgrading its pitching staff, both in the rotation and in the bullpen. Having already landed Orioles closer Jorge Lopez in a trade with Baltimore earlier this morning, it seems their focus has shifted to Mahle, who’d reunite with Gray and give the Twins a starter they can control for the remainder of the current season and for the 2023 campaign.

Mahle, 28 next month, has shaken off a terrible start to the 2022 season and pitched quite well over the past two months. He had a brief stint on the injured list due to a shoulder strain in mid-July, but Mahle only missed minimal time and has made a pair of effective starts since returning. Dating back to May 29, he’s pitched to a 2.83 ERA with a 27.9% strikeout rate and 7% walk rate in 57 1/3 innings.

Since a breakout during the 2020 season, Mahle has pitched to a 3.93 ERA with a 27.4% strikeout rate and 8.9% walk rate in 332 big league innings. He’s averaged 94 mph with his heater along the way and leaned heavily on a splitter and slider that have both graded out as above-average pitches at times — more recently favoring the splitter (particularly as a means of neutralizing lefties).

Beyond Mahle’s solid ERA, it’s easy to be intrigued by how he might fare when finally escaping the homer-happy confines of Cincinnati’s Great American Ball Park. He’s worked to an ugly 4.83 ERA and yielded an average of 1.69 home runs per nine innings over the past three seasons while pitching at home but boasts an outstanding 2.93 ERA and just a 0.52 HR/9 mark on the road. He also has above-average spin on his heater and rates in the 76th percentile or better, per Statcast, in each of the following metrics: expected ERA, expected batting average, expected slugging percentage and expected wOBA.

Mahle will give the Twins some desperately needed help in the rotation, which started the season on a surprisingly strong note but has floundered of late. Opening Day rotation members Bailey Ober and Chris Paddack are both on the injured list — Paddack lost for the season due to Tommy John surgery — and 2020 Cy Young runner-up Kenta Maeda is recovering from his own TJ procedure, performed late last season.

The Twins have leaned heavily on Mahle’s former Reds rotationmate Gray, rookie Joe Ryan and veterans Chris Archer and Dylan Bundy so far in 2022. Gray and Ryan have both been strong — a disastrous five-homer start for Ryan in his last appearance notwithstanding — and Bundy has been serviceable, if unspectacular, outside a pair of catastrophic starts of his own at the end of April and in early May. Archer has been limited to four or five outings per start throughout the season and begun to wilt in recent weeks, however, and the Twins’ overall rotation mix simply underwhelmed in July. Twins starters yielded an awful 6.49 ERA in July — third-worst among all big league teams.

Mahle is earning $5.2MM this season, making him plenty affordable even when factoring in his final arbitration raise for next season (or, as Dan Hayes of The Athletic suggests, in a potential long-term extension). Even absent an extension, he can be penciled into the 2023 staff alongside Gray, Ryan and (health-permitting) Maeda. That’s a much more solid foundation than the team carried into the current season.

Unlike this morning’s acquisition of Lopez, the Twins paid fairly extensively from the top end of their system to get this deal done. Steer, the Twins’ third-round pick in 2019, recently moved into the back end of Baseball America’s midseason top-100 rankings on the heels of a big first half.

Splitting his time between Double-A and Triple-A, Steer has turned in a combined .269/.361/.528 batting line with 20 home runs, 23 doubles, three triples, a 17% strikeout rate and a strong 10.8% walk rate. He’s split his time between second base, third base and shortstop this season, spending the bulk of his time at the hot corner (although Baseball America cites second as his best position). Given his breakout showing this year, it’s not unreasonable to think Steer could be an option for the Reds within the next year.

The 22-year-old Encarnacion-Strand, meanwhile was Minnesota’s fourth-round selection just last year. As with Steer, he’d having a huge season in the minors, logging a combined .302/.374/.612 batting line with 25 home runs, 25 doubles and four triples between Class-A Advanced and Double-A. Strikeouts have been more of an issue for Encarnacion-Strand than for Steer, as he’s fanned in about a quarter of his place appearances this season against a solid 8.7% walk rate. BA ranked him 14th in the Twins’ system, touting his plus-plus raw power but noting that he’s at best a fringey defender at third base and may need to move across the diamond.

Hajjar, 21, was the Twins’ second-round pick in last year’s draft and has had an impressive first full pro season this year. Minnesota has been limiting his workload, evidenced by 45 1/3 innings across a combined 13 starts, but the results have been strong. The former Michigan standout has logged a 3.18 ERA with a gaudy 39.2% strikeout rate so far, although his 14% walk rate is something he’ll obviously need to hone is he’s to ever realize his ceiling as a mid-rotation starter.

Hajjar can reach the mid-to-upper 90s with his heater, which he complements with a slider and changeup. Notably, Hajjar did spend more than a month on the shelf due to a shoulder strain, and his results since returning have been diminished. Still, he’s a clearly talented arm whom the Reds can add to the middle tier of a farm system they’re rapidly restocking.

With this trade, the Twins have now moved on from four of their top five picks in the 2021 draft since trading for Gray just prior to the season. That’ll take a toll on the system, which has also been harmed by a series of injuries to last year’s wave of top prospects (e.g. Josh Winder, Jordan Balazovic). That said, it’s also a testament to the strength of last year’s class. And, with the Twins receiving strong production from some recent graduates of the farm — including the aforementioned Ryan leverage reliever Jhoan Duran and slugging corner infielder Jose Miranda, among others — there’ll be a bit less pressure to tap into the upper levels of their system in the immediate future.

Time will tell whether the Twins have another move up their sleeve. They could certainly use another reliever and/or another starter, to say nothing of a backup catcher or an outfielder — all rumored to be on Minnesota’s wishlist. There’s about two hours left for them to find a way to pull together another deal (or deals). The Reds, meanwhile, will surely have other players on the move as general manager Nick Krall and his staff continue to restock the farm and simultaneously slash payroll.

C. Trent Rosecrans of The Athletic first reported (via Twitter) that the Twins and Reds were in “serious” talks regarding Mahle. The New York Post’s Jon Heyman tweeted that a deal was in place. Ted Schwerzler of TwinsDaily was first with the return (Twitter link).