10:08am: At a press conference announcing his decision, Stearns stated that he’s “not going anywhere” and will remain in Milwaukee. That, of course, doesn’t rule out pursuing opportunities in the future, but it’s a rather firm declaration that for the time being, he has no plans to join another organization. Rather, Stearns added that he’s “looking forward to taking a deep breath, spending time with my family and exploring some other interests.” 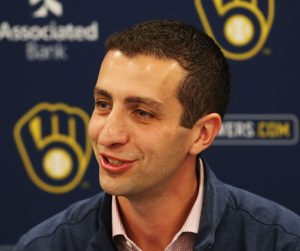 It’s a surprise shakeup atop the Brewers’ baseball operations department, as Stearns has built a reputation as one of the most widely respected baseball execs in the game since taking over the reins in Milwaukee. He’d been under contract through the 2023 season.

“This is not an easy decision for me and is something I have been wrestling with for a long time,” Stearns said in a prepared statement. “[Owner] Mark Attanasio and I have had an open dialogue and we both knew this day could eventually come. It has been a priority for both of us that any transition would take place while the organization is in a healthy position with solid leadership and a talented roster going forward. That is certainly the case today.”

“I’m very grateful to Mark and all of our staff for their support and efforts throughout my tenure with the Brewers,” Stearns continued. Matt [Arnold] and I both arrived in 2015 and he is more than ready for this next opportunity. I am committed to serving as a resource to Matt as he sees fit as the organization moves through this transition.”

Of course, the announcement will prompt immediate speculation about whether Stearns might ultimately be headed elsewhere. The team noted that he’ll serve ownership and the baseball ops department as an advisor, and Stearns himself suggests within those comments that he’ll remain with the organization for the time being to help guide Arnold and others through the transition. Nonetheless, his departure from such a prominent role could pave the way for his eventual departure altogether.

For instance, the Mets have pursued Stearns, a New York native, for their vacant president of baseball operations post in each of the past two offseasons but been denied permission to interview him. Mets owner Steve Cohen eventually landed on Billy Eppler to lead his baseball operations staff, but Eppler was given the “general manager” title, leaving the door open for a president to be appointed atop the hierarchy.

As for Arnold, he’ll receive autonomy over a baseball operations department for the first time in his career. Hired away from the Rays in 2015 to serve as an assistant GM under Stearns, Arnold was promoted to the title of general manager in 2020. Arnold, like Stearns, had been drawing interest from other teams in their front office search, and the bump to the GM’s chair made it more difficult for other teams to pursue him (as clubs are generally only permitted to interview other teams’ executives if they’re offering a promotion).

Despite holding the GM title for the past two years, the 43-year-old Arnold has been second on the team’s operations hierarchy until today’s announcement. He’s spent more than 20 years working in baseball ops, however, serving as Tampa Bay’s director of player personnel in addition to holding a variety of roles in scouting, player development and player analysis for the Dodgers, Reds and Rangers over his career.

That Arnold is the one now assuming oversight of the department leaves the Brewers with some more continuity than the standard changing of the guard, but the change in leadership is nevertheless a seismic shift for the Brewers. Attanasio called Stearns’ impact on the club “transformational” in his own statement today, adding that he’s “disappointed” in the decision but also “grateful” to Stearns for the past seven years.

It’s easy to see why. Prior to hiring Stearns in 2015, the Brewers had won only two division titles dating back to 1969 and had reached the postseason on just four occasions. Milwaukee won the NL Central in both 2018 and 2021 under Stearns’ leadership and reached the playoffs in four consecutive seasons, from 2018-21.

Along the way, Stearns, Arnold and their staff built out a powerhouse rotation headlined by draftees Brandon Woodruff and Corbin Burnes, as well as trade acquisitions such as Freddy Peralta, Eric Lauer and Adrian Houser. (Woodruff was drafted by the prior regime in 2014 but, as an 11th-round pick, is still a player development triumph for the organization as a whole.)

A look up and down the Brewers’ roster reveals one of the most trade-dependent clubs in the Majors. In addition to Peralta, Lauer and Houser, Stearns oversaw trades that brought Willy Adames, Rowdy Tellez, Hunter Renfroe and Luis Urias into the organization. His most infamous swaps include the lopsided Christian Yelich acquisition from the Marlins and the trade that sent Carlos Gomez and Mike Fiers to Houston in return for Houser, outfielder Brett Phillips and Josh Hader.

Stearns has drawn his share of flak for trading Hader to the Padres at this summer’s deadline despite the fact that his team was in contention for what would be a third NL Central title under his watch. The now-former Brewers president has since acknowledged that the move had a larger impact on the clubhouse than he anticipated. However, threading the needle by acquiring controllable talent in exchange for players with dwindling club control (at or near peak value) is a reality for most small- and mid-market front offices. (Hader will be a free agent next winter and has a projected $13.6MM salary in arbitration.)

In general, though, it’s fair to say that Stearns’ willingness to act boldly on the trade market has benefited the Brewers more often than it’s harmed them. Now, those decisions will ultimately fall to Arnold. It’s impossible to say for certain whether he’ll have the same affinity for aggressively attacking the trade market, but given Arnold’s roots in an ever-active Rays organization, seven years working alongside Stearns and a massive arbitration class, the Brewers are likely in for another active offseason.