Oct. 27: Dave Skretta of the Associated Press has the contract details. Wainwright will earn a base of $17.5MM, same as in 2022, but $10MM of that will be deferred. That deferred money will be paid out at a rate of $1MM per year from 2024 to 2033. He can also earn some extra cash via bonuses, getting $500K if he reaches 28 starts and another $500K at 30 starts. There’s another $500K if he finishes in the top 10 in Cy Young voting and then $50K bonuses for making the All-Star team, winning LCS MVP, World Series MVP or a Gold Glove award, and a $25K bonus for a Silver Slugger award. He will also have full no-trade protection.

Oct. 26: Adam Wainwright is continuing his career, as the Cardinals announced this afternoon that he’ll be back for a 19th season with the club. Derrick Goold of the St. Louis Post-Dispatch first reported Wainwright was in agreement on a one-year contract extension. Financial terms of the deal have not yet been disclosed. Wainwright is an Aegis Sports Management client.

Wainwright’s return puts to rest any questions whether he might join a pair of Cardinals icons in hanging up their spikes. Longtime battery mate Yadier Molina and Cardinals legend Albert Pujols each announced before this past season that 2022 would be their final playing years. There had been plenty of speculation the 41-year-old Wainwright would call it quits, too. Instead, he’ll be back on the Busch Stadium mound. 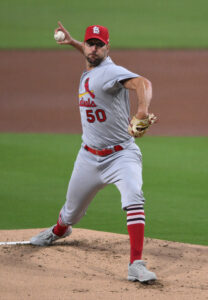 Of course, Wainwright has never thrived on a power arsenal. He’s succeeded into his 40’s thanks to excellent control and a knack for keeping hitters off balance with his trademark curveball. This year’s 6.7% walk rate wasn’t far off the prior season’s 6% mark. Wainwright also led all qualified starters in called-strike percentage, compensating for a lack of whiffs by freezing opponents by mixing his pitches inside the strike zone.

Wainwright’s re-signing solidifies the team’s rotation heading into the off-season. Miles Mikolas is signed through 2023, while mid-season trade acquisition Jordan Montgomery is arbitration-eligible for the final time, and both figure to be rotation mainstays. The backend of the rotation still has some question marks, though. Injuries contributed to Steven Matz struggling in his first season in St Louis, but he’s under contract for three more seasons and should at least have an opportunity to start the season in the rotation. Jack Flaherty is under control via arbitration for one more year, and while he’s also had injury problems for a while now, he figures to have a shot in the rotation if healthy.

With the uncertainty surrounding Matz and Flaherty and the potential free agent departure of Jose Quintana, St. Louis could look into fortifying by adding another rotation arm at the back end. The bigger priority, however, seems to be on the position player side. President of baseball operations John Mozeliak told reporters this morning the club would look externally for catching help to replace Molina. The team is also hopeful of their chances of retaining star third baseman Nolan Arenado, who’ll have to decide whether to opt out of the final five years and $144MM remaining on his deal.

It’s presently unknown how much Wainwright will make next season, although he’s coming off a one-year, $17.5MM salary. Mozeliak suggested the team planned to raise its payroll from this year’s approximate $155MM Opening Day mark.

On a more personal note, Wainwright’s return means he’s likely  to reach the 200-win milestone for his career. Owner of 195 career wins, he’ll have a chance to surpass Jesse Haines’ 210 wins for second on the Cardinals all-time leaderboard.