Jan. 27: The Athletics have announced the signing of Aguilar to a one-year contract. Yesterday’s trade of lefty Cole Irvin to the Orioles opened a spot on the 40-man roster, so there’s no need for a further corresponding move.

Jan. 24: The A’s and first baseman Jesús Aguilar are in agreement on a deal that will pay him $3MM. The deal for the MVP Sports Group client is pending a physical. The A’s have a full 40-man roster and will need to make a corresponding move once the deal is made official.

Aguilar, 33 in June, has appeared in the past nine MLB seasons, having a mercurial career so far. He didn’t produce much in his first three campaigns while with Cleveland, only getting into 35 games over that three-year stretch as the club kept him mostly in the minors. He was claimed off waivers by the Brewers going into 2017 and made the most of his new opportunity. Aguilar hit 51 home runs over the next two seasons, producing a batting line of .271/.344/.527 over 2017 and 2018. His 127 wRC+ in that time indicates he was 27% better than the league average hitter. 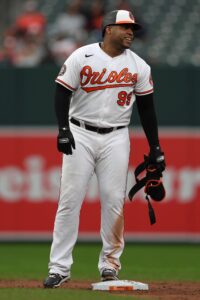 Defensively, Aguilar has made very brief appearances at third base but is primarily a first baseman. His work in the field has been considered near average, having produced 4 Defensive Runs Saved, -3 Outs Above Average and a 0.6 score from Ultimate Zone Rating. Since he has just a single stolen base in his career and limited defensive value, he needs to be producing at the plate in order to be a useful player. That’s occasionally been the case but his work with the bat has dipped often enough to bounce him off rosters a few times.

For the A’s, they have stripped down their roster over the past year, sending out most of their established players for prospects. They do still have Seth Brown on the roster who would be the most logical option for everyday reps at first base. However, he hits from the left side and Aguilar the right, so dividing up the playing time in a platoon could be a logical move. Aguilar has fairly even platoon splits for his career but Brown has struggled against southpaws, producing a 52 wRC+ against them for his career while posting a 122 mark against righties. Brown can also play the outfield and the club doesn’t have a strict designated hitter on the roster, making it fairly easy for manager Mark Kotsay to fit both players into the lineup if he so chooses. If Aguilar can get back in a good groove at the plate, he could serve as a trade chip for the A’s since they are unlikely to return to contention this season.

Financially, the deal brings the club’s payroll to $79MM, per the calculations of Roster Resource. It’s unclear how much the A’s plan on spending between now and Opening Day but they’re already way beyond last year’s $48MM figure, per Cot’s Baseball Contracts.