The Giants announced Monday that they’ve signed free-agent righty Luke Jackson to a two-year contract that includes a club option for a third season. He’ll be guaranteed $11.5MM that’s paid out in the form of a $3MM salary in 2023, a $6.5MM salary in 2024 and then a $2MM buyout on a $7MM option for the third year. Jackson, a client of Beverly Hills Sports Council, didn’t pitch in 2022 after undergoing Tommy John surgery back in April. The Giants didn’t provide a timeline, but given the date of his surgery, it’s likely Jackson will open the season on the injured list. 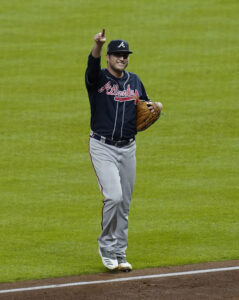 The 31-year-old Jackson had something of a roller-coaster tenure in the Atlanta bullpen, at times operating as the team’s closer and on other occasions being relegated to low-leverage roles while struggling through rocky results. He saved his best performance for last, however, dominating as the team’s primary setup man during their run to the World Series in 2021.

Jackson, who shook off a disastrous 6.84 ERA in the shortened 2020 season, pitched to an outstanding 1.98 ERA with a 26.8% strikeout rate and 11.1% walk rate for the Braves during the ’21 regular season. He was virtually unhittable in the season’s final couple months, recording a 1.35 ERA and 33-to-10 K/BB ratio with just one homer allowed over his final 26 2/3 frames that year.

For much of the postseason, the same was true. Jackson was unscored upon through his first six games in the playoffs — four NLDS games and two in the NLCS — before the Dodgers ambushed him for four runs in just one-third of an inning. The Braves lost that game (with Jackson taking the loss) but hung on to win the series. The World Series offered a chance at redemption for Jackson, and he seized it, firing 3 2/3 shutout innings with just one hit, no walks and four punchouts.

Looking at Jackson’s career from a broader perspective, the former No. 45 overall pick (Rangers, 2010) was a touted pitching prospect with Texas before being sent to the Braves in exchange for right-handers Tyrell Jenkins and Brady Feigl. Neither of those pitchers did anything for Texas, and while Jackson’s first season with the Braves in 2017 was rather nondescript, he began to turn a corner the following season.

It was 2018 when Jackson entirely shelved his changeup, scaled back the usage of his four-seamer and curveball, and began to throw his slider more than any other offering. Since that point, Jackson has seen his strikeout rate leap from an awful 13.4% to a very strong 27.1%. He’s averaged 95.5 mph on his heater along the way and also gone from a fly-ball pitcher to a robust ground-ball worker, keeping a whopping 55.8% of balls put into play against him on the ground. Command has been a frequent issue, evidenced by a 10% walk rate in his past 203 1/3 innings (2018-21), but Jackson’s ability to miss bats, induce double-plays and avoid home runs (0.93 HR/9) have helped him to offset that below-average ability to locate the ball.

Though he’s likely IL-bound to start the year, Jackson could still jump back into the big league bullpen before the season’s halfway point. Once he does, he’ll add some more swing-and-miss to what has become an increasingly sound relief corps in San Francisco. Lefty Taylor Rogers was signed for late-inning work alongside presumptive closer Camilo Doval, and the Giants will also have John Brebbia and Tyler Rogers (Taylor’s twin brother) in the mix for late-inning opportunities. The pitching staff has as many as seven capable starters — Logan Webb, Alex Cobb, Alex Wood, Ross Stripling, Sean Manaea, Anthony DeSclafani, Jakob Junis — and the potential for two of them (Junis and perhaps DeSclafani) to pitch in relief only further deepens the bullpen.

Jackson’s modest $3MM salary in 2023 will push the payroll to a projected $192.2MM, per Roster Resource, while the Giants are now up to more than $213MM in luxury-tax obligations. That leaves plenty of room for some additional signings, whether to further deepen the relief corps or to add another bat to the lineup.