January 3: The White Sox have officially announced the Benintendi signing and provided a specific contract breakdown. The outfielder will receive a $3MM signing bonus, followed by an $8MM salary in 2023, $16.5MM for the next three years and then $14.5MM in 2027. The club’s 40-man roster is now at 39.

December 16: The White Sox have agreed to a five-year contract with free-agent outfielder Andrew Benintendi, reports ESPN’s Jesse Rogers (via Twitter). Benintendi, a client of Excel Sports Management, will be guaranteed $75MM on the contract, tweets Ken Rosenthal of The Athletic. 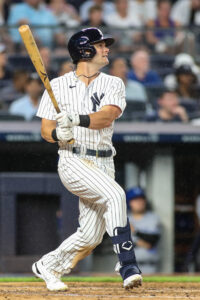 Benintendi, 28, was the No. 7 overall pick in the 2015 draft by the Red Sox and ranked as the sport’s No. 1 prospect at Baseball America, ESPN and MLB.com prior to his big league debut. The runner up to Aaron Judge for American League Rookie of the Year honors in 2017, he turned in a brilliant .290/.366/.465 batting line with 18 home runs and 21 steals a year later in 2018, seemingly setting the stage for him to break out into full blown stardom.

That never really transpired, however. Four full seasons have gone by since that time, and Benintendi has instead settled in as a solid regular in left field but not the perennial All-Star he looked to be early in his big league tenure. He’ll typically hit for average, draw plenty of walks and play good defense — Benintendi won a Gold Glove in 2021 — but he’s never settled in as a consistent power threat. Benintendi’s 20 home runs in 2017 still stand as his career high, and he hit just five home runs in 521 plate appearances between the Royals and Yankees in 2022 before a fractured hamate in his wrist ended his season.

Over the past four seasons, Benintendi has posted a combined .276/.345/.417 batting line with 35 home runs and 27 steals. He’s always been tough to strike out, but never more so than in 2022, when he fanned in just 14.8% of his plate appearances. It’s possible Benintendi took a more conservative, contact-oriented approach that resulted both in him hitting fewer home runs but also putting the ball in play with more frequency. Regardless, the lack of punchouts likely appealed to a White Sox club that posted the seventh-lowest strikeout rate in all of baseball last year and watched as the Guardians won the AL Central with by far the game’s lowest strikeout rate.

A corner outfielder and left-handed bat to help balance out a heavily right-handed club were both clear needs for the South Siders, and Benintendi can check both boxes. He’ll hit at or near the top of the lineup, with Eloy Jimenez like sliding into a primary DH role now that Benintendi is on board. The Sox also bid farewell to stalwart first baseman Jose Abreu this offseason, which cleared the way for Andrew Vaughn to move from right field, where he ranked as one of MLB’s worst defenders at any position, to his natural position of first base.

Removing Vaughn and Jimenez from regular outfield work would’ve improved the outfield defense regardless of the replacements, but plugging Benintendi into the mix provides a substantial upgrade. In 5775 career innings in left field, he’s been credited with 32 Defensive Runs Saved. It’s notable that Statcast’s Outs Above Average feels quite differently, pegging Benintendi at -15 in that same time, although that’s skewed by one -10 season in 2019 (a season that DRS agrees was below average from a defensive standpoint). Benintendi and center fielder Luis Robert give the Sox a pair of above-average defenders in the outfield, although if the plan for right field is to use Gavin Sheets as a bridge to prospect Oscar Colas, at least one of the three outfield spots will still have the potential to be a defensive liability.

The White Sox opened the 2022 season with a club record $193MM payroll, and the addition of Benintendi figures to put them right back into that range again. Benintendi also pushes Chicago’s luxury-tax ledger a bit north of $205MM, per Roster Resource, though that’s still $28MM from the $233MM first tier of penalization. The Sox could still use help at second base and could stand to deepen their bench, so it’s likely that subsequent moves will push the team to a franchise-record payroll for a second season (barring a trade that sheds a current contract).

Somewhat remarkably, the $75MM guarantee gives Benintendi the largest contract in White Sox franchise history, narrowly topping Yasmani Grandal, who’d held the record at $73MM. The ChiSox have offered more than this in some high-profile free agent pursuits in recent years, most notably offering more than $200MM to Manny Machado and more than $100MM to Zack Wheeler. Both players, of course, ultimately signed elsewhere.