The Marlins announced an avalanche of roster moves in advance of tonight’s deadline for protection from the Rule 5 Draft. Being selected to the 40-man roster are right-handers Jorge Guzman, Jordan Yamamoto, Jordan Holloway and Kyle Keller, infielder Isan Diaz, outfielder Monte Harrison and left-hander Jose Quijada. Adding that group required the creation of three spots on the 40-man roster, which led the club to designate left-hander Dillon Peters, outfielder Braxton Lee and right-hander Ben Meyer for assignment.

Of the players to be designated for assignment, Peters is perhaps the most interesting. It’s not long ago that the 26-year-old lefty was deemed one of the more promising arms in an admittedly thin Marlins system on the heels of a 2.38 ERA between Class-A Advanced and Double-A in 2016. Peters didn’t have gaudy strikeout numbers but showed excellent control, and he followed up that season with a 1.57 ERA, 7.9 K/9 and 2.4 BB/9 through 63 innings between Double-A and Triple-A in 2017.

He’s been shelled in the Majors, though, surrendering a 6.10 ERA in 59 innings while displaying walk issues that weren’t present as he worked through the minors. At this point, he’s 26-year-old (27 next August) who’s yet to even pitch at Triple-A and hasn’t had success in the Majors — but one who did draw praise for an above-average breaking ball in the past. A year ago at this time, he was viewed as a largely MLB-ready back-of-the-rotation starter.

Lee, meanwhile, drew plus running grades as a prospect and was said to have an average or better glove with a chance to play center. He’s never shown any semblance of power but has previously had excellent contact skills and even won a Double-A batting title in 2017. His 2018 campaign was a disaster, though, as Lee hit just .233/.316/.294 across three minor league levels and didn’t hit in a tiny sample of 18 MLB plate appearances.

The Marlins announced on Friday that they’ve selected the contract of outfielder J.B. Shuck from Triple-A New Orleans. To clear room on the 40-man roster, first baseman/outfielder Garrett Cooper has been moved from the 10-day DL to the 60-day DL. Outfielder Braxton Lee was optioned to New Orleans to create a 25-man spot for the veteran Shuck.

Cooper recently landed on the disabled list when he was hit on the wrist by a pitch, and while the initial injury report out of Miami was a contusion, it seems that the injury is likely worse than that given today’s shuffle. Indeed, MLB.com’s Joe Frisaro tweets that Cooper has been diagnosed with a partially torn wrist tendon sheath.

That’s obviously unfortunate news for the 27-year-old, who had a clear path to a full-season showcase with the Fish. The rebuilding Marlins organization acquired Cooper over the winter from the Yankees and had planned to give him a shot at earning time in the corner outfield while also backing up Justin Bour at first base.

Cooper put himself on the map with a surprising minor-league breakout last year, leading to his acquisition by the Yankees and first crack at the majors. In his first 54 plate appearances at the game’s highest level, nine of which came early this season, he carries a .300/.333/.440 batting line.

The 30-year-old Shuck, meanwhile, will help fill in for at least the time being. He failed to spend any time in the majors last year, instead turning in 475 plate appearances of .259/.325/.368 hitting at Triple-A with the Twins organization. In just over a thousand trips to the plate in the majors, Shuck carries a .251/.299/.328 batting line with eight home runs.

Though the Marlins fielded a $115MM payroll last season in Jeffrey Loria’s final year of ownership, the financial plan of the Bruce Sherman/Derek Jeter ownership group doesn’t call for payroll to return to those heights until 2021, according to Barry Jackson of the Miami Herald. Jackson cites a pair of copies of the financial plan provided to potential investors, entitled Project Wolverine, in providing a number of details on the Marlins’ upcoming year-to-year payrolls as well as some aggressive revenue and attendance projections.

Notably, while the Marlins are aiming for a payroll around $90MM in 2018, the plan projects even lower payrolls in 2019-20 ($81MM and $84.8MM, respectively), before jumping back into the nine-figure range. Part of the reason for the healthier number in 2018 could be the one-time $50MM payout that all 30 MLB teams are receiving after Disney’s acquisition of BAMTech, per Jackson. (Beyond that, Edinson Volquez, Brad Ziegler and Junichi Tazawa will be off the books after 2018.) It’s unclear whether trades of additional MLB assets will significantly alter those projections, though Jackson notes that Christian Yelich, J.T. Realmuto and Starlin Castro are available “for the right price,” while the team is (unsurprisingly) amenable to trading Tazawa ($7MM in 2018) and Ziegler ($9MM in ’18).

A bit more out of Miami…

END_OF_DOCUMENT_TOKEN_TO_BE_REPLACED 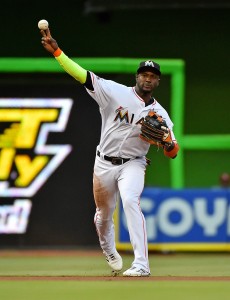