A variety of teams cleared 40-man space today. Some of the moves are reflected elsewhere on the site, but we’ll round up the others right here:

The 24-year-old Therrien made his Major League debut this season, appearing in in 15 games and totaling 18 1/3 innings. As Matt Gelb of the Philadelphia Inquirer notes, his 92.6 mph average fastball in the bigs was diminished from his minor league velocity, and Therrien’s results were nowhere near the promising output he showed in the minors. Therrien obliterated minor league opponents, posting a ridiculous 1.41 ERA with 10.2 K/9 against 1.4 BB/9 in 57 1/3 innings between Double-A and Triple-A. In the Majors, he logged an 8.35 ERA on 24 hits and seven walks with just 10 strikeouts.

The loss of Therrien for the 2018 campaign will deprive the Phils of one of their more promising relief prospects next season, though Therrien is certainly young enough to bounce back and make meaningful contributions when the Phils are closer to contention in 2019 and beyond.

In the meantime, the Phillies will turn to a bullpen group that is likely to feature Hector Neris, Luis Garcia, Edubray Ramos, Kevin Siegrist and Adam Morgan next year. Other candidates will include young arms such as Victor Arano, Hoby Milner, Ricardo Pinto, Yacksel Rios and Zac Curtis, though the Philadelphia front office could certainly look to augment its internal options with some veterans on the free-agent and/or trade markets this winter. President Andy MacPhail, GM Matt Klentak and the rest of the Phils’ front office brought in veterans Pat Neshek and Joaquin Benoit last winter, both to help stabilize a group of inexperienced relievers and for the potential to emerge as summer trade chips.

Dusty Baker wants to continue managing the Nationals beyond the 2017 season, but ownership has yet to make him an extension offer, reports Chelsea Janes of the Washington Post. According to Janes, GM Mike Rizzo made a strong recommendation to ownership that the team extend its relationship with Baker, but nothing has materialized. Janes spoke to Rizzo, Ryan Zimmerman and Max Scherzer about Baker, with each offering praise and voicing a hope that he’ll remain beyond the current season. Scherzer, in particular, spoke on behalf of keeping Baker at the team’s helm. “We love him,” said the two-time Cy Young winner. “We want him here. They [ownership] want to be patient, but I hope they don’t mess with this clubhouse.” Janes notes that the Nats have a history of underpaying managers, which may have cost them a chance at Bud Black two offseasons ago. Baker acknowledged that he knew what he was getting into, financially speaking, when joining the Nationals but also suggested that he feels his current two-year, $4MM contract is a bit light. “…I think I’ve earned more than I’m being paid,” he said.

This week’s installation of “Knocking Down The Door” includes two highly-touted center field prospects, a reliever who had been doing his best Kenley Jansen impression in Double-A before a recent promotion to Triple-A, and a pair of starting pitchers who can’t be too far off from making their MLB debuts after dominating in their last outings.

If the Yankees, one of three teams in baseball to have only used five starting pitchers this season, need to dip into their farm system for rotation help, they appear to be in good shape with Chance Adams waiting in the wings.

The 22-year-old right-hander has risen up the ladder swiftly without much of a struggle in 220 2/3 minor league innings. After posting a 1.03 ERA in six Double-A starts to begin the season, he hasn’t slowed him down one bit since a promotion to Triple-A. He recently lowered his ERA to 1.57 after tossing one-hit ball over six shutout innings with two walks and a season-high 12 strikeouts in his fourth start with Scranton/Wilkes-Barre.

There doesn’t appear to be an immediate opening in the Yankees’ rotation, although Masahiro Tanaka’s recent performance—21 earned runs and 30 hits over his last 17 2/3 innings—might be an indication that he’s not completely healthy and could use a stint on the disabled list.

Acquired from the Mariners this past offseason for Danny Valencia, Blackburn has not wasted time in impressing his new organization. After not allowing a run in three of his last four starts, including seven shutout innings on Sunday, the 23-year-old has his ERA down to 3.26 with a 2.4 BB/9 and 6.7 K/9.

With Jharel Cotton’s demotion to Triple-A last month lasting only two starts due to injuries to Kendall Graveman and Jesse Hahn, Blackburn’s emergence could afford the A’s the opportunity to get him back down to there to work on things for an extended period this time around.

Prior to a hitless game on Sunday, the 23-year-old Fisher had been on a nine-game hitting streak in which he had a .486 batting average (18-for-37), four doubles and four homers. It would likely benefit him to continue working on his game down in Triple-A, but he could also learn on the job in a low-pressure environment while giving the Astros much more production than they’re currently getting out of left field. 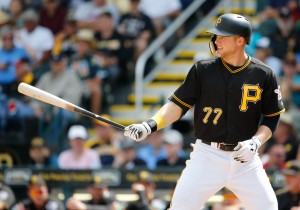 When the Pirates were in need of an outfielder in mid-April after the 80-game suspension of Starling Marte was announced, Meadows was in a deep slump and not deserving of his first MLB call-up. With Marte’s return still more than a month away, however, it’s not too late for the Pirates to get a look at their top prospect, who has turned things around and has the potential to give a struggling team a much-needed shot in the arm.

Since posting a .503 OPS with five walks and 20 strikeouts in April, the 22-year-old has hit .302 with two homers, 12 doubles, 11 walks, 20 strikeouts and six stolen bases over his last 31 games. Adam Frazier, who is currently getting most of the starts in left field, has been one of the few bright spots for the Pirates. His ability to play multiple positions, however, makes him valuable as a super-utility man, which will be his role if Meadows gets the call.

Therrien is only one scoreless appearance into his first Triple-A stint, but if his numbers at Double-A are any indication—1.26 ERA, 28 2/3 innings, 14 hits, three walks, 39 strikeouts—the 24-year-old right-hander shouldn’t be far away from helping a beleaguered Phillies bullpen.

With Joaquin Benoit on the disabled list, Jeanmar Gomez demoted to the bottom of the depth chart and Edubray Ramos not having the impact the team was hoping for, the rebuilding Phillies could not only use some reinforcements, they could also start looking towards the future and finding out which young arms will be able to help them in 2018 and beyond.