Veteran righty Kevin Gregg has opted out of his minor league deal with the Mariners, Triple-A Tacoma announcer Mike Curto reports. Gregg signed with Seattle a few weeks back.

The 36-year-old started the year with the Reds, but was released after struggling to a 10.13 ERA in 10 2/3 innings. Gregg did show an ability to miss bats in that stint, racking up 14 strikeouts (against five walks). Gregg put up better results at Tacoma, putting up 9 1/3 innings of 2.89 ERA ball with an 8-to-5 strikeout-to-walk ratio.

The Marines have signed righty Kevin Gregg to a minor league deal, the team announced (via Ryan Divish of the Seattle Times, on Twitter). He will head to Triple-A, taking the place of the recently-traded Yoervis Medina in the Tacoma pen.

Gregg, 36, was designated recently by the Reds after opening the year with a prominent role in the Cincinnati pen. He struck out 14 batters in his 10 2/3 innings, walking five in the process, but nevertheless scuffled to a 10.13 ERA.

Over parts of 13 years in the big leagues, Gregg has posted 720 1/3 innings and averaged a 4.24 ERA. His best stretch came in the 2007-2010 time frame, when he closed for the Marlins, Cubs, and Blue Jays. (Since, he has also functioned in a 9th-inning capacity for the Orioles and again in Chicago.)

The Reds announced that they have designated right-hander Kevin Gregg for assignment. Right-hander Pedro Villarreal has been recalled from Triple-A Louisville to fill his spot in the bullpen.

The 36-year-old Gregg made Cincinnati’s bullpen out of Spring Training after signing a minor league deal this offseason, but he’s struggled all season long. Gregg has appeared in 11 contests for Cincinnati and allowed runs in eight of them, the end result of which is a grisly 10.13 ERA.

Gregg has missed plenty of bats with the Reds, whiffing 14 batters against five walks in his 10 2/3 frames, and he’s also averaged 91 mph on his heater — his best since 2012. His struggles have contributed to a team-wide problem for the Reds. Cincinnati has a collective 5.56 bullpen ERA that ranks dead last in the Majors, with the Rockies’ 5.20 mark representing a relatively distant second-worst.

With rosters being finalized around the league, it’s a busy time for players departing and ascending to the 40-man roster. Here’s the latest:

Earlier today, the Reds announced that they’ve signed Kevin Gregg to a minor league deal and invited him to Spring Training. Gregg, 36, allowed 10 earned runs in nine innings with the Marlins last season before undergoing season-ending surgery to remove bone chips from his throwing elbow. The former Cubs/Marlins/Blue Jays closer has a lifetime 4.15 ERA with 8.2 K/9 and 4.1 BB/9 in 709 2/3 innings. He has a $1.5MM base salary on his contract should he make the team, per Jon Heyman of CBS Sports (Twitter link).

The Marlins announced today that Kevin Gregg’s season is over, as the 36-year-old right-hander will undergo surgery to remove bone chips from his elbow. The Fish inked Gregg to a minor league deal back in early June and guaranteed him a base salary that was roughly equivalent to the value of the Competitive Balance pick they traded to the Pirates for fellow righty Bryan Morris. While the Morris acquisition has paid off in spades — he’s allowed one earned run in 31 1/3 innings — the decision to essentially reallocate that money to Gregg didn’t work out anywhere near as nicely. Gregg allowed 10 runs in nine innings with Miami before hitting the DL last month. 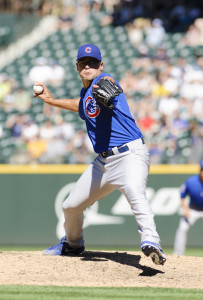 Orioles shortstop J.J. Hardy told reporters today (including Eduardo A. Encina of the Baltimore Sun) that he won’t comment any further on his contract situation because there haven’t been any new developments. “There’s nothing to discuss,” said Hardy before adding that there haven’t been any recent negotiations between the two sides. Encina writes that Hardy and the O’s haven’t had extension talks since Spring Training. A few more late night links from around the league…

7:23pm: While the Mets are indeed looking for a late-inning reliever, and could give out a MLB deal to get one, the club is unlikely to land Rodney, a source tells Marc Carig of Newsday (via Twitter).

4:44pm: Though the Mets recently announced the signing of Kyle Farnsworth to a minor league deal, the team still has some money allotted for a "closer type" reliever, reports ESPNNewYork.com's Adam Rubin, citing a source that is not affiliated with the club.

Fernando Rodney is believed to be New York's top target, but Rubin's source wouldn't rule out Kevin Gregg, Joel Hanrahan or Ryan Madson either. Other relievers on the market that come with closer experience include Carlos Marmol, Andrew Bailey and Brandon Lyon, though Lyon spent last season with the Mets with less than favorable results (4.98 ERA in 34 1/3 innings). Those next three names are just my speculation, not names that were mentioned by Rubin or his source.

Rubin writes that incumbent closer Bobby Parnell is confident that he will be healthy following surgery to repair a herniated disk in his neck. However, as Rubin points out, the Mets have little in terms of a fallback plan should Parnell go down with another injury. Hard-throwing Vic Black projects to be next in line for the closer's throne, and he has a total of 17 big league innings under his belt.