10:26pm: Rivera will be guaranteed $2.8MM on his deal with the Angels, Fletcher reports (also via Twitter).

9:39pm: The Angels announced tonight that they’ve agreed to terms on a one-year, Major League contract with veteran catcher Rene Rivera. In order to clear a spot on the 40-man roster, the Halos have designated lefty Nate Smith for assignment. As Jeff Fletcher of the Orange County Register reports, via Twitter, Smith is undergoing shoulder surgery and is expected to miss the entire 2018 season. 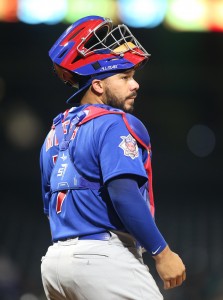 By adding the 34-year-old Rivera, the Angels further bolster what is shaping up to be one of the top defensive clubs in all of Major League Baseball. Rivera isn’t likely to start in Anaheim, but he carries a superlative defensive reputation and will complement 2017 Gold Glove winner Martin Maldonado to form a terrific defensive duo behind the dish.

Overall, Rivera is a rather light-hitting catcher, as evidenced by a career .220/.271/.349 batting line and a .224/.280/.368 slash over the past four seasons. But, he’s also thrown out 36 percent of would-be base thieves in his big league career and has been remarkably consistent in that regard; Rivera has never posted a caught-stealing rate lower than the 30 percent clip he registered in 2016, and he halted a hefty 37 percent of stolen-base attempts against him this past year in 2017.

From a pitch-framing standpoint, Rivera was only a tick above average in ’17, but he’s been average or better in that regard in each season of his Major League career. Baseball Prospectus considered Rivera a roughly average defender at the position overall this past season, but he ranked as the fifth-most valuable defensive backstop in the game as recently as 2016, per their Fielding Runs Above Average metric.

The addition of Rivera pushes Carlos Perez and Juan Graterol, both on the 40-man roster, out of the picture as Maldonado’s backup. That’s especially significant for Perez, who is out of minor league options and now stands out all the more as a change-of-scenery candidate. (Graterol, meanwhile, has a pair of minor league options remaining.) The Angels have also picked up former Rays catcher Curt Casali on a minors pact this offseason, and the presence of Rivera further muddies his path to the big league roster.

With limited resources at his disposal, Angels general manager Billy Eppler did well to plug holes throughout his team’s roster this offseason. The improved depth will not only help his team over the 162-game grind, it will result in some competition this spring.

Here are some notable position battles to keep an eye on.

On the surface, Maybin should have a strong edge in this battle. Despite missing a good part of the 2016 season due to an assortment of injuries, he slashed .315/.383/.418 with 15 stolen bases in 393 plate appearances for the Tigers. Revere is coming off of an abysmal season with the Nats (.217/260/.300 in 375 plate appearances) in which he deservedly lost his starting job.

However, both players have been around long enough that their track records, as well as spring performance, will play a part in determining who will get the bulk of playing time when the season begins. Maybin has a long history of injuries and subpar offensive seasons. Revere, up until 2016, had been able to compensate for a lack of power and plate discipline with a .303 batting average and 36 stolen bases per season from 2012-2015. It would be tough to keep him out of the lineup if he returns to that form. Defensively, Maybin and Revere each cover a ton of ground and should be well above-average in left field.

Ackley, who signed a Minor League deal this offseason after he was released by the Yankees, is probably the most intriguing player in camp who could conceivably do enough in Spring Training to make a push if both Maybin and Revere struggle terribly. The 2nd overall pick in the 2009 draft, Ackley had an impressive rookie season with the Mariners in 2011, but has been a disappointment since.

Even if manager Mike Scioscia names one as his starter, it’s likely that he’ll look for platoon opportunities and/or go with the “hot hand” during the season, with Maybin and Revere both getting a chance to run away with the job.

Considering that Street had been one of the most consistent and reliable relief pitchers in baseball for more than a decade prior to an injury-plagued and ineffective 2016 season, it’s fair to say that he deserves the benefit of the doubt and should remain in the closer role to start the 2017 season.

The emergence of Bedrosian, however, is the likeliest reason why Street will have a much shorter leash than he’s ever had during his career. If not for a blood clot that ended his season two days after taking over as the closer when Street landed on the disabled list in early August, Bedrosian might have already proven that he’s the best man for the job. It won’t be long, though, if he can pick up where he left off (1.56 ERA, 11.4 K/9 in 45 appearances).

Former A’s closer Andrew Bailey also earned his way into the competition by pitching well after the Angels signed him to a Minor League deal in August (11.1 IP, 3 ER, 9 H, 2 BB, 8 K). For Bailey to get serious consideration, though, he’d have to give the Angels every indication that he is healthy and back to the form that made him a Rookie of the Year and two-time All-Star very early in his career.

Prediction: Street on Opening Day. Bedrosian takes the job from him by June 1st.

Not only is there a rotation spot that is Skaggs’ to lose, he’s a strong candidate to break out in 2017. In his first season since undergoing Tommy John surgery in 2014, Skaggs was eased back into action with 10 MLB starts after a late-July promotion. The Angels will still likely proceed with some caution since he only threw a total of 89 innings in 2016. He’ll need to prove in Spring Training that he’s ready to handle a full workload or else he could begin the season in Triple-A.

Chavez’s versatility is a big part of his value, but the Angels did not have the financial freedom to give nearly $6MM to a pitcher who wasn’t going to start or factor into the late-inning mix. He’ll be given every opportunity to win a rotation spot. In 26 starts with the A’s in 2015, he had a 4.37 ERA with 7.6 K/9 in 150.1 innings pitched. The Angels would be ecstatic if he can come close to that production.

Meyer, a former top prospect for the Twins, has battled injuries and control issues throughout his career. He does have an upper-90’s fastball, however, which is why he’s the most intriguing candidate on this list. The bullpen might be his ultimate destination, but the Angels probably aren’t ready to give up on him as a starter just yet. The 6’9″ right-hander only pitched 50.1 innings in 2016, but 12 of his 13 appearances, including all five at the MLB level, were starts.

Smith doesn’t have Meyer’s ceiling, but he has the potential to be a solid back-of-the-rotation starter and he might be ready to step in now. Both he and Meyer are on the 40-man roster, which is why they’ll get a long look this spring.

Like Chavez, Petit is valuable because of his ability to pitch as a swingman. In this case, he’ll be given an opportunity to win a rotation spot, although he’ll have an uphill battle to stand out. His ability to successfully bounce from the bullpen to emergency spot starter might even work against him since he’s an appealing candidate for the pen. Norris isn’t that far removed from being a very good MLB starter, but he’s had a rough go of it over the past two seasons (5.79 ERA in 196 IP between four teams). Regardless, Petit and Norris are veterans who are capable of contributing at some point, even if not right out of the gate.

Valdez, 26, posted a respectable 4.24 ERA in 23 1/3 innings with the Angels this season and averaged a robust 95.3 mph on his heater, making him at least an intriguing future option for the Halos next season. However, he also issued 16 walks, hit a batter and uncorked a pair of wild pitches in that brief time with the Angels, demonstrating enough of a control issue that the team didn’t see fit to dedicate a 40-man roster slot to him this winter.

Parker, 31, split the 2016 season between the Mariners and Yankees, totaling 17 1/3 innings of 4.67 ERA ball with 15 strikeouts against eight unintentional walks. The Angels claimed him back in earlyt October, on the heels of a season in which he actually averaged a career-best 92.2 mph on his fastball this season and does come with a 3.67 career ERA in 90 1/3 innings at the Major League level. He’s an extreme fly-ball pitcher and has averaged 10.5 K/9 in parts of nine seasons at Triple-A but has also averaged 4.2 walks per nine innings there.

De Los Santos was also an offseason waiver claim by the Angels, out of the Reds organization. De Los Santos tossed 20 1/3 innings in Triple-A this season and logged a 3.54 ERA with a 26-to-13 K/BB ratio, and he has a lifetime 3.03 ERA in Double-A as well. He has just 7 1/3 innings of big league experience under his belt, during which he’s allowed eight runs.

Among the four players added to the 40-man roster, Smith is perhaps the most interesting.  The lefty had a 4.61 ERA with 7.3 K/9 against 2.6 BB/9 in 150 1/3 innings at the Triple-A level last year, which doesn’t really stand out, but he does rank as the top pitching prospect in the organization, per MLB.com. The Halos will enter 2017 with Garrett Richards, Matt Shoemaker, Tyler Skaggs and Ricky Nolasco locked into rotation spots, health permitting, leaving the fifth spot up for grabs among Smith, Jesse Chavez, Alex Meyer and Daniel Wright (plus any further offseason additions).