Like their division rivals, the Brewers lost a top starter to injury before the season even started. But unlike the Cardinals, the Brewers have reason to expect their ace back before long. As a result, it appears that Milwaukee has the depth to get by without making external additions.

Zack Greinke cracked a rib playing basketball and will start the season on the disabled list, so the Brewers will begin the eagerly anticipated 2011 campaign without their most accomplished starter. Yovani Gallardo, Shaun Marcum, Randy Wolf and Chris Narveson should provide rookie manager Ron Roenicke with a strong front four and the team doesn't expect to need an extra starter very often; GM Doug Melvin told MLB.com's Adam McCalvy that the Brewers will only need a fifth starter three times in April. 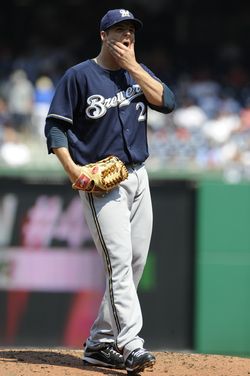 Though the Brewers have a thin farm system – Baseball America ranked it 30th among the 30 MLB organizations – top prospect Mark Rogers started two games for the club last year and could be an option this spring. Rogers, a raw 25-year-old, has an upper-90s fastball and a potentially devastating curve, according to Baseball America. Those tools helped him post a 3.65 ERA with 9.3 K/9 and 4.0 BB/9 in the minors last year after missing 2007 and 2008 with shoulder operations. The right-hander has encountered some shoulder issues again this spring, however, so he's no sure thing.

But the Brewers don't have to push Rogers to the major leagues, since Manny Parra (pictured) is available, as long as his back stiffness passes, as he expects it to. The left-hander has averaged 24 starts over the course of the past three seasons, including 16 starts in 2010. He posted a 5.02 ERA with 9.5 K/9 and 4.6 BB/9 as a swingman last year, logging 122 innings.

Roenicke recently told McCalvy that he considers Tim Dillard, Wily Peralta and Amaury Rivas potential starters as well. The team's current options don't compare with Greinke, but Parra, Rogers or someone else should be able to provide the Brewers with a handful of solid starts as their ace recovers.