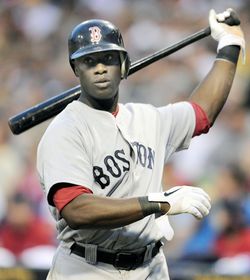 The Red Sox cut ties with veteran outfielder Mike Cameron yesterday, designating him for assignment after he hit just .149/.212/.266 in 105 plate appearances this year. "Rest assured I'll play again," said Cameron to Peter Abraham of The Boston Globe (Twitter link). "I'm not going out that way."

Despite his poor season and last year's injury riddled campaign (just 48 games), Cameron figures to draw interest based on his track record. He hit .250/.342/.452 with 24 homers as a full-time player just two seasons ago, and he went deep at least 20 times every year from 2006 through 2009. That power might be gone at 38 years old, but his three homers this year suggest that he might still be able to provide double digit long balls given enough playing time.

With approximately $3.625MM left on his contract this year, it's very likely that Cameron will clear waivers and hit the open market. Any team would then be able to sign him for the pro-rated league minimum, which is attractive to clubs on a budget. Let's look at some teams that could be potential suitors for Cameron…

Jack Curry of the YES Network heard that the Yankees "probably" won't have interest in Cameron (Twitter link), but several other teams figure to come calling once he clears waivers and is available on the cheap. It's easy to see Cameron fitting on the 25-man roster of nearly even team, though the amount of playing time he'll receive is sure to factor into his decision.