Kendrys Morales has proven himself as an above-average MLB hitter and he's still just 28 years old. He appeared in yesterday's Spring Training contest, but hasn't played in an official game since May 29th, 2010, the day he injured his left ankle in a walk-off home run celebration gone wrong. There are no guarantees for Morales as he attempts to complete his comeback. 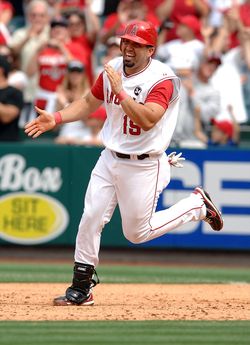 But there’s a difference between appearing in a Spring Training game and contributing regularly at the Major League level. The initial fracture sidelined him for a year and he had to have his ankle cleaned out again last May. Even routine activities such as baserunning are more stressful for him than they are for other players.

If Morales comes close to replicating his MVP-caliber 2009 season, his career will finally be on track. He’ll have job security for 2013 and a obtain generous raise when he goes through the arbitration process for the final time next offseason.

However, if he struggles to stay on the field or fails to produce when he plays, there’s a good chance the Angels will cut ties with him by December's non-tender deadline. There would be no sense in guaranteeing Morales another $3MM at that point. And as appealing as free agency is to players coming off of strong seasons, Morales’ job prospects will be limited unless he stays healthy and hits.

For now, however, Morales is simply targeting Opening Day. If his ankle holds up and his swing returns, 2012 could be as rewarding as 2011 was frustrating.