As last summer wore on, it became clear that Delmon Young didn’t figure in to the Twins’ long-term plans. He wasn’t hitting and he wasn’t getting any more affordable, so a non-tender seemed entirely possible. Instead, the Tigers acquired Young from their division rivals last August and he hit eight home runs in the season’s final six weeks before hitting five more homers in the postseason. The Tigers weren’t going to release Young after a performance like that, and he’s currently Detroit’s starting left fielder. Young will debut on the free agent market six months from now and in the meantime he faces a make-or-break year. 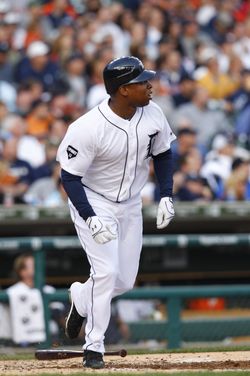 Let’s start with the positives. Young hits for a high average and offers some power. The right-handed hitter produces especially well against left-handers, as his career .305/.341/.475 split shows. He also has pedigree as the first overall selection of the 2003 draft. Plus, he won’t turn 27 until September, which makes him much younger than most free agents.

However, his defense in left field costs his team, according to The Fielding Bible Volume III and UZR. He strikes out often, rarely walks and offers ordinary offense against right-handed pitching.

It’s currently difficult to imagine the Tigers making Young a qualifying offer this coming offseason. Young doesn’t seem like a $12.5MM player and he’s never produced like one, according to FanGraphs’ version of the Wins Above Replacement metric. Young will hit the open market unfettered by draft pick compensation, barring the unexpected.

Young’s representatives at Wasserman Media Group will ask for a multiyear deal should he replicate his 2010 season or continue hitting the way he did upon arriving in Detroit. Josh Willingham, now 33, obtained a $21MM contract last offseason. Three days later, 29-year-old Jason Kubel signed a two-year deal worth $16MM. A similar market could emerge for Young’s services if he serves up an eye-catching combination of batting average, homers and RBI this year. Any team that signs Young to a multiyear deal will face its share of criticism from scouts and analysts alike, but back-of-the-baseball-card stats have some appeal to this day, so a multiyear deal with a generous annual salary remains possible.

If Young puts together a disappointing season and solidifies the impression that he’s simply a lefty masher who doesn’t play defense, he’ll be limited to modest one-year offers. He may still be 26, but his skillset sometimes resembles that of a much older player. And as Andruw Jones (one-year, $2MM) and Jonny Gomes (one-year, $1MM) can confirm, the market for part-time righty bats isn’t lucrative.