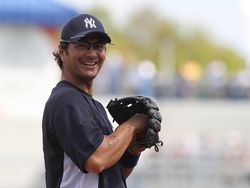 Chavez, ranked 49th on MLBTR's Top 50 Free Agents list, excelled in his bench role last season, spelling both Alex Rodriguez and Mark Teixeira while seeing some time as the Yankees' designated hitter. Chavez, who turns 35 this week, posted a slash line of .281/.348/.496 with 16 home runs in 313 plate appearances.  He resides in Paradise Valley, Arizona, which was surely a factor in his decision.

The Red Sox and Yankees were among the other teams that had interest in Chavez.

Jon Heyman of CBS Sports broke the story, and Jack Magruder of FOXSportsArizona.com had the dollar amount.  Photo courtesy of U.S. Presswire.