The Mariners have officially signed Raul Ibanez to a one-year contract, the team announced. The deal is worth $2.75MM guaranteed with another $1.25MM in performance bonuses. The ACES client played in Seattle from 1996-2000 and 2004-2008. 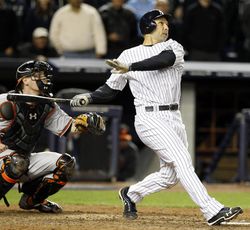 The Mariners acquired Kendrys Morales last week, who gives the team a logjam at first base and DH along with Jesus Montero, John Jaso, Justin Smoak, and Ibanez. MLBTR's Tim Dierkes did not rate Ibanez as one of this winter's top 50 free agents. The Mariners designated D.J. Mitchell for assignment to clear a spot on the 40-man roster.