The Red Sox have officially signed free agent shortstop Stephen Drew to a one-year contract, the team announced. The Scott Boras client will earn $9.5MM in 2013, with another $500K available in performance bonuses. 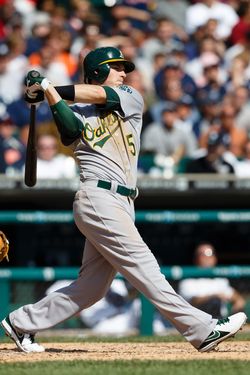 Drew, 29, will have the chance to re-build his value in Boston and seek a multiyear deal in free agency a year from now. He posted a .223/.309/.348 batting line with seven home runs in 327 plate appearances for the Diamondbacks and Athletics this past season. The ankle injury that ended Drew's 2011 season prematurely sidelined him until the end of June, 2012.

Drew's presence in Boston will push 22-year-old infielder Jose Iglesias to the bench, or perhaps to the minor leagues. Known for his tremendous defense, Iglesias has a .264/.313/.314 batting line as a minor leaguer and doesn't have Drew's offensive upside.

The Indians, Tigers, Athletics, Yankees, and Cardinals also showed interest in Drew this offseason. He ranked 24th on MLBTR’s list of top 50 free agents, but wasn’t linked to draft pick compensation, since he wasn’t eligible to obtain a qualifying offer.

As MLBTR’s Free Agent Tracker shows, the class of free agent shortstops looks especially thin with Drew off of the board. Interested teams could turn to the trade market, where Asdrubal Cabrera and Jed Lowrie are among the potential trade targets.