It's not often that you see a well-regarded starting pitcher (or any well-regarded player, for that matter) appear on eight different teams prior to his 30th birthday, but that's the situation in which Edwin Jackson currently finds himself. Of course, Jackson inked a four-year deal with the Cubs that should give him some stability, but that's not his first stop in Chicago.

Jackson spent parts of two seasons across town as a member of the White Sox rotation from 2010-11. General manager Kenny Williams swung a midseason deal in 2010 that brought a struggling Jackson from the Diamondbacks to the White Sox in exchange for right-hander Daniel Hudson (23 years old at the time) and minor league lefty David Holmberg (18). It's been nearly three years since that trade occurred, so let's take a look at the players involved…

The Major League Side: 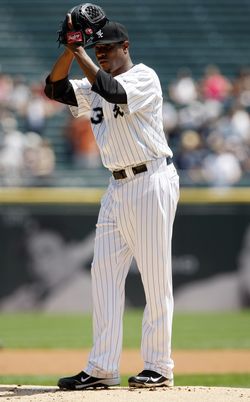 The Minor League Side:

Three years later, it looks like the Diamondbacks got a very good return for a talented but struggling starter. It's conceivable that within the next two seasons, 40 percent of Arizona's rotation will consist of the two players they received in this deal. Jerry Dipoto, the D-backs' GM at the time of the trade (he's now GM of the Angels), did well to secure a pair of prospects who ranked in Chicago's Top 10.

The price Chicago paid doesn't seem crazy either, given Jackson's terrific results with the White Sox. Jackson gave them 4.9 wins above replacement, but most fans will look back on this trade in a negative light due to the lack of return for Jackson when they traded him a year later. That's a fair criticism (and also a trade for another post), but Jackson was every bit the pitcher the White Sox were hoping he'd be when they acquired him. This would probably go down as a win-win had the Sox contended in 2011 or made the playoffs in 2010.