The Dodgers signed free agent reliever Brian Wilson,tweets Yahoo's Tim Brown.  It's a guaranteed big league deal, tweets ESPN's Jerry Crasnick, and Jim Bowden of ESPN and MLB Network Radio says it's worth $1MM plus performance bonuses.  The Beard had a long road to recovery from April 2012 Tommy John surgery.  He spent his entire career in the Giants organization, racking up 171 saves in the process.  The Giants non-tendered him after last season, and the fully-recovered Wilson auditioned for many teams Thursday.  Wilson had three offers, notes Brown.  The 31-year-old reliever is represented by MVP Sports Group. 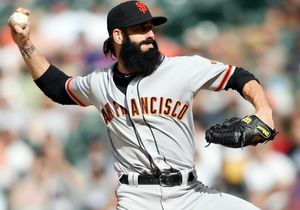 The Dodgers' bullpen struggled at the outset of the season, partially due to the decision to anoint Brandon League the closer.  Kenley Jansen officially usurped that role in mid-June.  The Dodgers have also gotten good work from lefties J.P. Howell and Paco Rodriguez.

The tentative plan for Wilson is to begin at the Dodgers' complex in Arizona, then go to Rancho Cucamonga as part of a rehab assignment, and then report to the Dodgers in two weeks, tweets Brown.  In theory, the move could take the Dodgers out of the running for other, similar relievers available for trade.