The Orioles have acquired Bud Norris and an international bonus slot from the Astros in exchange for outfielder L.J. Hoes, left-hander Josh Hader and a 2014 Competitive Balance pick. The Orioles won the second pick of Comp Round A in this year’s Competitive Balance lottery. In 2013, that would’ve been the No. 35 pick, which carried a value of $1.588MM. The Astros will send the No. 91 international bonus slot in the deal, which is valued at $213K. 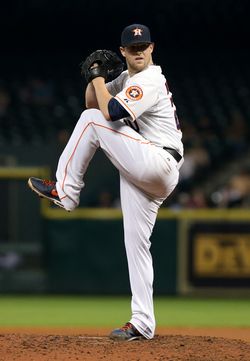 Norris, 28, has a 3.93 ERA with 6.4 K/9 and 3.1 BB/9 in 126 innings with the Astros this season. Despite being Houston’s highest paid player, Norris is earning just $3MM in 2013. He is controlled through 2015 and is eligible for arbitration for the second time this offseason. With Norris now in Baltimore, Erik Bedard becomes the highest-paid player on the Astros’ roster at just $1.15MM — an unthinkable concept in today’s game.

Hoes, a 23-year-old outfielder, ranked as Baltimore’s No. 6 prospect prior to the season according to Baseball America. Selected by the Orioles in the third round of the 2008 draft, Hoes is batting .304/.406/.403 in 430 plate appearances for Triple-A Norfolk this season. BA notes that Hoes is a pure hitter with a nice line-drive swing with plenty of patience that should lead to high on-base percentages. If his power develops, he profiles as an everyday left fielder, according to BA.

Hader ranked 19th among Orioles prospects prior to the season according to BA, but MLB.com’s Jonathan Mayo has him ranked fifth among O’s prospects in the midseason edition of his list, thanks to a strong season at Class-A Delmarva. In 85 innings this season, the 19-year-old Hader has a 2.65 ERA with 8.4 K/9 and 4.4 BB/9. According to Mayo, Hader sits 89-93 mph with his fastball, and his curveball and changeup both project to be average pitches at the least.

The Orioles were the most aggressive team in trades this July, acquiring Scott Feldman, Francisco Rodriguez and Norris to bolster their pitching staff. The Astros, meanwhile, dealt Norris and Jose Veras to continue to build what has become a strong farm system.

Ken Rosenthal of FOX Sports first reported that the two sides had reached an agreement for Hoes and a Competitive Balance pick (Twitter links). Dan Connolly of the Baltimore Sun reported that Hader was involved in the deal (on Twitter).