The Royals have acquired Justin Maxwell from the Astros, according to Ken Rosenthal of FOX Sports (on Twitter).  The Astros receive minor league pitcher Kyle Smith, tweets Bob Dutton of the Kansas City Star. 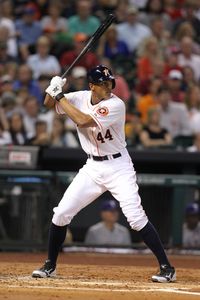 Maxwell, 29, can play all three outfield positions and is hitting .241/.311/.387 with a pair of homers and four steals in 151 plate appearances this season. He slugged 18 homers last season for Houston and has hit lefties at a .253/.370/.455 clip throughout his career. Maxwell is controllable through the 2016 season and will be eligible for arbitration for the first time this offseason.

While many have speculated that the Royals should ultimately be sellers, the team certainly took a win-now approach this offseason in trading a prospect package highlighted by Wil Myers for James Shields and Wade Davis. They're riding a seven-game winning streak that has pushed them back above .500. Maxwell should be able to platoon with David Lough in right field and fill in around the outfield when needed.

Maxwell is the second significant piece to be moved by the Astros this week, as general manager Jeff Luhnow traded closer Jose Veras to the Tigers in exchange for outfield prospect Danry Vasquez and a PTBNL earlier this week.