Alfonso Soriano is heading back to the same team with which he began his Major League career. After stops in Texas and Washington and an extended stay in Chicago, Soriano has come full circle by officially waiving his no-trade rights to approve a trade to the Yankees. 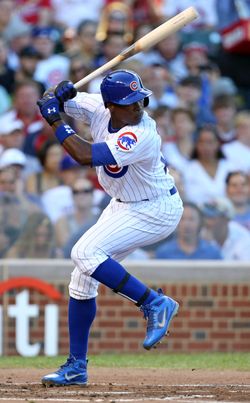 The Cubs will receive minor league right-hander Corey Black in the trade, which was approved by Major League Baseball this morning and later officially announced by the Yankees.

Black, 21, ranked as the Yankees' No. 25 prospect prior to the season, according to Baseball America. BA wrote that Black's fastball has touched 100 mph and sits comfortably at 95 mph. His plus athleticism allows him to repeat his release point, according to BA, and he also features an average changeup and improved slider to go along with a fringe curveball. The Yankees were developing him as a starter, though Joel Sherman of the New York Post tweeted earlier today that the Cubs view Black as a power reliever in the future. In 82 2/3 innings at High-A Tampa this season, the 2012 fourth-round pick has a 4.25 ERA with 9.6 K/9 and 4.9 BB/9.

Reports that a trade was on the horizon first surfaced yesterday after Soriano was pulled from the Cubs' lineup. Manager Dale Sveum confirmed to reporters shortly after that a trade sending the longtime Cub to New York was "99 percent" complete.

The Yankees have been in the market for upgrades to their offense for quite some time, and while Soriano's OBP leaves something to be desired, he certainly still has power. Perhaps more important is the fact that he is of particular benefit against left-handed pitching. Soriano is hitting lefties at a .273/.310/.496 clip thus far in 2013, which will be a significant boost to a Yankees club that has batted just .234/.306/.338 against opposing southpaws.

The Cubs have been far and away the most active seller in baseball at this point, having traded Scott Feldman, Scott Hairston and Matt Garza prior to this deal. They're expected to continue their aggressive sale through the trade deadline next Wednesday.

Paul Sullivan of the Chicago Tribune was the first to report (via Twitter) that Soriano had been pulled from the lineup and a trade was on the verge. USA Today's Bob Nightengale first reported that the deal was finished, pending MLB approval, and the Cubs would receive a Class-A pitcher. ESPN's Buster Olney broke the news regarding the exchange of cash (on Twitter), and Jim Bowden of ESPN and MLB Network Radio first reported that MLB had approved the deal (Twitter link). Joel Sherman of the New York Post was the first to report that Black was the prospect Chicago would receive for Soriano (via Twitter).