7:21pm: The Blue Jays have officially announced the signing via press release.

9:02am: Navarro's contract is pending a physical and will guarantee him $8MM over two years, according to Rosenthal (on Twitter).

8:32am: The Blue Jays have reached an agreement with catcher Dioner Navarro on a two-year deal, according to Ken Rosenthal of FOX Sports (on Twitter). Navarro is a client of Melvin Roman's MDR Sports Management. 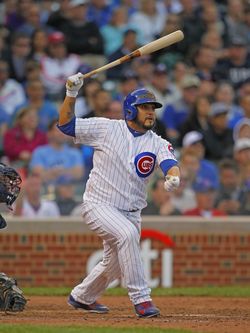 Catcher was a clear area of need for the Blue Jays this offseason after J.P. Arencibia, Josh Thole, Mike Nickeas and Henry Blanco combined to bat .190/.235/.335 in 2013. No team received a lower batting average or on-base percentage from its group of catchers than Toronto in 2013.

Navarro will turn 30 in February, and his signing could cost Arencibia his job, as Rosenthal notes in a second tweet. Blue Jays GM Alex Anthopoulos recently said in a radio interview that Arencibia would not be with the club as a backup in 2014 (as chronicled by Sportsnet's Ben Nicholson-Smith). Navarro's two-year deal seems to indicate that he's in line for significant playing time, and the club would also like to use Thole to catch R.A. Dickey, says Rosenthal. As such, Arencibia, who projects to earn $2.1MM via arbitration this winter, could find himself on the move today, as tonight is the deadline to tender him a contract for the 2014 season.