4:30pm: The Dodgers confirmed the signing.

3:52pm: The Dodgers are set to re-sign Juan Uribe to a two-year deal, according to Ken Rosenthal of FOX Sports (via Twitter). Uribe is represented by Praver/Shapiro, according to the MLBTR Agency Database.  Financial terms of the deal are not yet known. 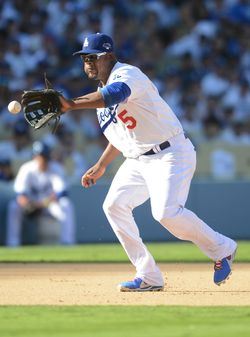 Earlier today, Dodgers GM Ned Colletti said that he was hopeful that he could bring the third baseman back to Los Angeles.  It was a mild surprise to hear that given the reports indicating that the Dodgers were set to move on after a lack of responsiveness from Uribe's side to their latest offer.  The Dodgers were said to be seeking a one-year deal with an option for year two but it would appear that the veteran has secured two guaranteed years.

Uribe hit .273/.331/.438 for the Dodgers last season, a dramatic improvement over the .199/.262/.289 line he gave L.A. in the previous two campaigns.  The new deal keeps the 34-year-old in a comfortable spot – he's spent the last three years in L.A. and thanks to stints in Colorado and San Francisco, he's spent all but five of his 13 big league seasons in the NL West.

Uribe made over 100 starts for the Dodgers in 2013 and was incredibly valuable, posting the fourth-best WAR among all free agents.  It's a far cry from his position prior to the '13 season when some wondered if the Dodgers might look to cut Uribe and eat the $7MM remaining on his deal.

The Dodgers were looking at re-signing Michael Young to be their everyday third baseman as a contingency plan and while he could still return to L.A., it would appear that he'd have to sign on in a different role.  The Marlins and Rays were also among the clubs with interest in Uribe.

MLBTR's Tim Dierkes predicted that Uribe would land a two-year, $12MM deal at the outset of the offseason.