The Indians designated third baseman Juan Uribe for assignment, according to an announcement from the team.  The move clears a roster spot for new acquisition Brandon Guyer, acquired in a trade with the Rays today.  Uribe, 37, posted a .206/.259/.332 line in 259 plate appearances for the Indians this year, tallying over 500 innings at the hot corner.  The team had signed the beloved veteran to a $4MM free agent deal in February. 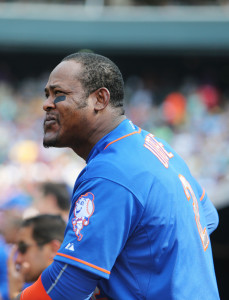 Juan Uribe’s career isn’t over yet, as evidenced by his $4MM agreement to play for the Indians this season.  When Uribe does hang up his glove, however, he’ll have no shortage of post-playing opportunities — Terry Pluto of the Cleveland Plain Dealer reports that at least three teams have offered to hire the highly-respected veteran infielder for jobs in their organizations.  Here’s some more from around the AL Central…

Extension talks between the Royals and Salvador Perez are ongoing, writes Sam Mellinger of the Kansas City Star. According to Mellinger, the team has an openness to working something out that hasn’t necessarily been present in the past. For his part, Perez expressed to Mellinger a desire to follow the path of George Brett and Alex Gordon, spending his entire career in the Royals organization. Perez feels a sense of loyalty to the club that gave him the chance to break into the big leagues, but his agent, Rafa Nieves of the Beverly Hills Sports Council, explained to Mellinger that it’ll be hard to offer much of a discount. “He left so much on the table in his present deal,” said Nieves of the five-year, $7MM deal (with three club options) brokered by Perez’s former agents. “He can’t afford to leave a lot more on the table in his next deal. So that’s where we’re at.” Mellinger notes that a rival executive expressed some disbelief that a small-market club could be willing to renegotiate a contract that favors the club so heavily.

Indeed, Jeff Todd and I have noted multiple times on the MLBTR Podcast that there’s significant risk for the Royals, who control Perez through 2019 at a total of $16.75MM via those club options. Perez is one of the largest catchers in baseball, and considering his enormous workload behind the plate (137 games caught, on average, per season from 2013-15), locking in Perez’s 2020 salary four years in advance is a tremendous risk, as there’s no way of definitively knowing how his body will hold up.

The Washington Post’s Barry Svrluga spoke to a number of GMs to get their takes on how draft pick compensation for his latest piece on Ian Desmond  and other players that have been burdened by the qualifying offer. As Svrluga notes, former National Denard Span was able to secure a three-year deal despite playing in just 61 games last season and undergoing hip surgery late in the year. “Whether that pick is there or not is huge,” said Giants GM Bobby Evans, who signed Span to the aforementioned three-year, $31MM contract. “It just comes down to cost vs. benefit: How will that free agent benefit your club in the coming year and years ahead vs. the cost — which is not only financial now. It’s also a prospect. In that way, you have to think of it like a trade.” Svrluga also spoke to Padres GM A.J. Preller, White Sox GM Rick Hahn and Angels GM Billy Eppler, the latter of whom explained that while each club values draft picks slightly differently, every team assigns a monetary value to draft selections and stressed the importance of draft picks.

Some more notes on the infield market…

Here’s the latest out of the AL Central:

Veteran third baseman Juan Uribe remains available in free agent as the market for infielders has continued to move slowly. He’s been a consistently productive player since turning around his fading career in 2013, putting up a .281/.329/.432 slash while averaging about a dozen home runs over 400 plate appearances annually since that time. And while defensive metrics didn’t view him as a huge contributor with the glove last year, as they had in the two prior seasons, Uribe factors as a positive in the field. Of course, he’s also closing in on 37 years of age.

Anthony McCarron of the New York Daily News takes an interesting look back at what was perhaps the first modern deployment of the opt-out clause. Then-Twins GM Andy MacPhail utilized a player option to lure top starter Jack Morris to the organization. “I thought, what’s the worst thing that can happen?” says the current Phillies president. “I was already committed to giving him $9 million over three years. He could pitch great and leave or he could like it and stay the whole time. Either scenario, I would’ve taken. Nor did I get any criticism at the time.” Things couldn’t have worked out much better, as it turns out, as Morris helped lead Minnesota to a World Series before departing. If you’re interested in some more reading on the history and development of the now-pervasive opt-out, check out this piece from MLBTR’s Tim Dierkes.

Here are some notes from the game’s central divisions:

The Indians entered the offseason with a real need in the outfield, writes Paul Hoynes of Cleveland.com. The additions of Mike Napoli and Rajai Davis won’t have the impact of a Yoenis Cespedes, but they should help improve the club’s floor. Free agent Juan Uribe might be the next target. The club still lacks a dynamic bat like Manny Ramirez which may force them to manufacture runs.