The Reds have announced that they’ve acquired Phillies outfielder Marlon Byrd and cash from the Phillies for righty prospect Ben Lively. The Phillies will pay half of Byrd’s $8MM salary in 2015, and nothing on his $8MM club/vesting option for the following year. 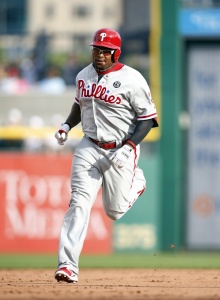 Earlier this week, FOX Sports’ Jon Morosi reported that the Reds and Phillies had discussed a Byrd deal that ultimately didn’t take flight. It appears, however, that they finally found common ground. The Reds have traded Mat Latos and Alfredo Simon this offseason and have added few significant players of their own. An outfielder to add to Jay Bruce and Billy Hamilton was high on their shopping list, though, so it’s no surprise they’ve agreed to a trade for Byrd.

After an excellent 2013 campaign with the Mets and Pirates, Byrd kept hitting in 2014, batting .264/.312/.445 with 25 homers for Philadelphia. He’s average to above average defensively in a corner outfield spot, although he has mostly played right field recently and will be asked to play left in Cincinnati. Byrd had also frequently been connected to the Orioles this offseason.

Lively, 22, was the Reds’ fourth-round pick in 2013 out of the University of Central Florida, and he’s quickly made his way through the minors, spending 2014 with Class A+ Bakersfield and Double-A Pensacola. Overall, he posted a 3.04 ERA with 10.2 K/9 and 3.1 BB/9. MLB.com ranks Lively as the Reds’ eighth-best prospect, noting that his stuff overwhelming but that he does have four good pitches and hides the ball well.

FOX Sports’ Ken Rosenthal, who initially tweeted that the teams agreed to terms, als noted that the amount of money the Reds will receive was significant. CBS Sports’ Jon Heyman tweeted immediately before the deal that the two sides could soon reach an agreement.