Just a day after trading Dexter Fowler to the Cubs, the Astros look to have found a replacement, as the team announced on Tuesday the signing of Colby Rasmus to a one-year deal. The Excel Sports Management client will reportedly take home an $8MM guarantee, and his contract does not contain any options. 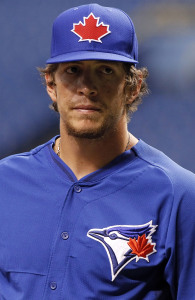 Rasmus, 28, entered the offseason as one of the most intriguing available free agents. Though he struggled a great deal in terms of average and on-base percentage in 2014, Rasmus again showed solid power and possesses upside that much of the free agent class could not match at the onset of the offseason. Overall, Rasmus batted .225/.287/.448 with 18 homers in 376 plate appearances in a season that was shortened by a hamstring issue. He also lost some playing time late in the season as Toronto elected to see what it had on its hands in top prospect Dalton Pompey.

Houston has always seemed like a plausible landing spot for Rasmus, but the match really opened up with the recent trade of Fowler to the Cubs. The Astros have Jake Marisnick in hand as a right-handed hitting center field option, but could potentially pair him with Rasmus in some form of platoon. Though Rasmus has not played the corner outfield since his rookie year, he could presumably spend time there as well.

In essence, the Astros appear to have swapped out Fowler for a combination of Rasmus in the outfield, Luis Valbuena at third base(acquired in the Fowler deal and likely to replace Matt Dominguez) and possibly Dan Straily in the rotation (also acquired in the Fowler deal). The addition of Rasmus serves as another transaction with short-term ramifications for an Astros team that made a 19-game improvement in the win column in 2014. The club has also added Evan Gattis recently, and the team is also said to be in serious talks with Ryan Vogelsong, who is reportedly in Houston for a physical. However, in spite of last season’s improvement, it can’t be ignored that the team still won just 70 games overall.

One also has to wonder about the Astros’ apparent decision to load up on so many strikeout-prone players; Rasmus joins a group of regulars — Chris Carter, George Springer, Jonathan Singleton and Jason Castro — who whiffed at a 30 percent clip or higher. Though Houston projects to have an abundance of power throughout the lineup, Astros fans may again need to be prepared for a strikeout-prone offense and somewhat of a boom-or-bust approach at the plate.

As for Rasmus, a multi-year deal for him never appeared to materialize, so he will now look to make good on a one-year deal and hit the open market again next winter heading into his age-29 season. That’s still younger than the typical free agent, though Rasmus will have the unenviable task of stacking up against the likes of abnormally young free agents such as Jason Heyward and Justin Upton on the open market in the 2015-16 offseason.

Ken Rosenthal of FOX Sports first reported that the two sides were talking (Twitter link). Mark Berman of FOX 26 tweeted that Rasmus was in Houston for a physical. Jon Heyman of CBS Sports tweeted that the deal would be one year once it was finalized. MLB Network’s Matt Yallof first reported the guarantee (Twitter link), while Jon Morosi of FOX Sports added that the contract contained no options.