The Pirates have announced a four-year extension for infielder/outfielder Josh Harrison. Pittsburgh will guarantee the super-utility man $27.3MM over the next four seasons and will also hold two club options that could bring the deal’s total value to $50.3MM. 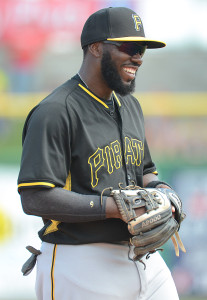 Harrison, 27, broke out last year for the Bucs after several years shuttling between the big leagues and upper minors. Despite previously carrying a sub-.700 OPS, Harrison slashed .315/.347/.490 in 550 plate appearances in 2014, adding 13 home runs and 18 stolen bases.

That elite contribution came at an opportune time, as it landed Harrison a $2.8MM contract in his first year of arbitration eligibility. In exchange for promising away the rest of his arbitration years and three seasons of free agent eligibility (two via options), Harrison now pockets an additional $24.5MM in guaranteed money.

MLBTR’s Steve Adams took a look at Harrison as an extension candidate back in September. After a detailed breakdown of his surprising emergence, Steve explained the difficulties that the two sides might encounter in valuing a new contract. A new factor was introduced when the Bucs landed Korean infielder Jung-ho Kang.

But with Harrison showing no signs of slowing down over a solid spring, team and player were able to bridge any differences and find common ground. In the end, Pittsburgh will commit slightly more than the Indians did last year for Michael Brantley but will pick up an additional season of control in the second option. The club will now enjoy the wide flexibility that Harrison offers in planning their next several offseasons, while hoping that his contract pays off as much as Brantley’s has.

Detractors will note that Harrison benefited from a .355 BABIP last year. But he has traditionally carried a high mark in the minors and still would have had plenty of value on offense — to say nothing of the other elements of the game — had that number been lower. If Harrison can remain even a slightly above-average hitter, he ought to justify his contract and then some.

All links to Twitter: Jon Heyman of CBSSports.com first reported the total value of the deal. Ken Rosenthal of FOX Sports reported details while Rob Biertempfel of the Pittsburgh Tribune-Review also reported financial details and Bill Brink of the Pittsburgh Post-Gazette added the deal’s escalator clause.