The Cardinals have announced the acquisition of first baseman/outfielder Brandon Moss from the Indians in exchange for left-handed pitching prospect Rob Kaminsky. 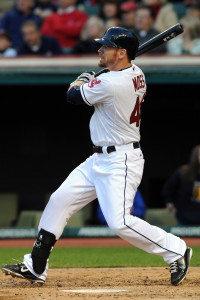 With the acquisition of Moss, the Cardinals will add a powerful left-handed bat to their lineup that will replace the injured Matt Adams, who is likely to miss the remainder of the season due to a torn quadriceps muscle. In Adams’ absence, Mark Reynolds has been seeing the lion’s share of playing time at first base, though one would imagine that Moss will now inherit those duties.

The Cardinals are also facing a potential loss of Matt Holliday, who last night injured the same quadriceps muscle that he tore earlier this season. There’s no definitive word on the severity of the injury just yet — he underwent an MRI last night — but an extended absence would be a blow to the Cardinals’ offense that could be partially offset by the addition of Moss. Should Holliday miss a prolonged stretch, Moss is capable of handling the corner outfield, but the Cardinals already have top prospect Stephen Piscotty on the big league roster, and he could slide into left field in that scenario.

Moss was acquired by Cleveland this past offseason in a one-for-one swap that sent second base prospect Joey Wendle to the Athletics. The lefty slugger, who averaged 25 homers per season from 2012-14 in Oakland, has again displayed power in his lone season with Cleveland (15 homers, .190 ISO). However, his walk and strikeout rates have trended in the wrong direction, leaving him with a sub-par .217/.288/.407 batting line on the season. That production is a far cry from the .254/.340/.504 output he showed in his three full seasons with Oakland, though it’s worth wondering if he’s still feeling any lingering effects from offseason hip surgery.

The 31-year-old Moss has typically struggled versus left-handed pitching, and while that should remain the expectation moving forward, the opposite has held true in 2015. Moss is hitting .265/.336/.453 in 131 plate appearances against same-handed pitchers but has just a .191/.262/.382 batting line against righties. Much of the struggles against righties is due to a .221 BABIP when holding the platoon advantage, so one would expect that his production may very well rise with some better fortune. He is, after all, still hitting line drives at a 20.5 percent clip and has actually lowered his infield fly rate.

Moss is earning $6.55MM in 2015 and is controllable through the 2016 season — the Cards will have to sort out the roster when he and Adams are both healthy — but it does seem as though St. Louis paid a steep price in this swap.

The 20-year-old Kaminsky was one of two Cardinals first-round picks in 2013 (Marco Gonzales was the other) and currently ranked as their No. 4 prospect on Baseball America’s midseason update of the team’s top prospects. MLB.com was even more bullish on their own midseason update, ranking him third in the Cardinals’ organization and 88th in all of baseball.

Kaminsky has spent the season pitching at the Class-A Advanced level, where he has a 2.09 ERA with 7.5 K/9 against 2.7 BB/9. In their scouting report, Jonathan Mayo and Jim Callis of MLB.com write that Kaminsky’s fastball sits in the 89-92 mph range and can touch 95 mph when he needs it, adding that he has the best curveball in the team’s minor league system. His changeup gives him a third pitch that can be solid-average or better. Fangraphs’ Kiley McDaniel would seem to agree, as he pegs Kaminsky’s curveball as a potential 60-grade pitch (on the 20-80 scale), with his fastball, changeup and command all coming in at 50 (average) or better.

St. Louis reportedly discussed Adam Lind with the division-rival Brewers before agreeing to this swap, but it looks as though talks failed to progress, as I wouldn’t imagine they’ll acquire both Moss and Lind, who have somewhat redundant skill sets. Assuming no money changes hands, the Cardinals will be on the hook for about $2.47MM of Moss’ remaining salary.