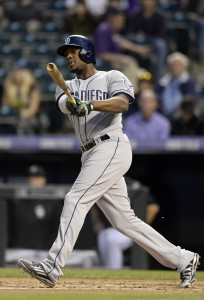 Upton’s pedigree is still an important selling point, because it implies he’s yet to reach his ceiling.  According to Baseball America, Upton was on scouts’ radars when he was 14 years old.  After he was drafted out of high school by the Diamondbacks in ’05, BA wrote that he had “unbelievable tools” and felt that the term “five-tool prospect” sold him short.  Upton was the consensus pick for first overall, after older brother B.J. (now known as Melvin) went second overall to the Rays in 2002.  Justin was seen as a patient, powerful hitter, with great bat speed, plus power potential, big-time speed, and a cannon for an arm.

Ten years later, Upton has 190 home runs under his belt through age 27.  Of the 30 non-active players who accomplished that feat, 17 are in the Hall of Fame.  Upton has 82 home runs over the last three seasons, 17th in baseball.  Among those with 1500 plate appearances in that time, Upton ranks 22nd in slugging and 18th in ISO.  Power is Upton’s main calling card, and at age 28, there may be more to come.  Upton is also an asset on the basepaths, as his baserunning runs above average marks can attest.

I wouldn’t call Upton one of the best players in baseball, but he is one of the game’s better outfielders.  Over the last three years, his 10.6 wins above replacement ranks 18th among outfielders.  He was an All-Star in 2009, ’11, and ’15, finishing fourth in the MVP voting in ’11.  Upton has been durable, averaging 152 games played over the last five seasons.

As we’ve mentioned, Upton will play most of next season at age 28.  The only other top 30 free agent position players who will play next year in their 20s are Jason Heyward and Colby Rasmus.  Upton’s age leaves room for upside and should result in his team getting more prime years.

Let’s be honest: Upton hasn’t lived up to the mammoth expectations placed on him.  He only reached 30 home runs once in his eight seasons, and that was four years ago.  Power may be Upton’s strength, but fellow free agent Chris Davis has shown much more.  Upton’s ability to get on base is nothing special, and one can name at least 20 hitters who have been better overall over the last three years.  You can find at least 40 hitters who were better this year.  Upside is nice, but if this is all Upton is, he’s a good player and not a great one.

Strikeouts are part of Upton’s game.  He has whiffed in 25.8% of his plate appearances since 2013; only seven qualified hitters struck out more often.  Oddly enough, all of them are either free agents or non-tender candidates.

Upton’s left field defense grades out as roughly average.  Advanced metrics show he was a touch above average this year, and a touch below last year.  I don’t consider it a strength or a weakness, but I felt his defense warranted mention.

Upton is expected to receive and turn down a qualifying offer from the Padres, so signing him will require draft pick forfeiture.  This is not the case for one of his main market competitors, Yoenis Cespedes.

Upton was born in Norfolk, Virginia and resides in Scottsdale, Arizona with his wife.  Justin grew up in a baseball family.  His father Manny scouted for the Royals and White Sox, and older brother Melvin was drafted second overall in ’02.  Justin battled an immaturity label early in his career, as outlined in this 2012 ESPN article by Robert Sanchez.  It should be noted that he made his MLB debut at age 19.  Upton signed a six-year, $51.25MM extension with the Diamondbacks in March 2010, but was traded to the Braves in January 2013.  He spent 2013 and ’14 roaming the outfield alongside his brother Melvin, who had signed with Atlanta a few months prior.  Then Justin was traded to the Padres in December 2014, and Melvin rejoined him after a separate deal in April.

Upton should have plenty of suitors this winter, though he does not seem likely to re-sign with the Padres.  The Orioles don’t have much at the outfield corners, and could have money to spend if they lose Chris Davis.  The Yankees could be a suitor if they trade Brett Gardner.  The Rangers could be a potential match if they have an appetite for another large contract.  The White Sox have a need in the outfield, but have never spent even $70MM on a player.  The Mariners could have a spot for Upton, but he rejected a trade to Seattle in 2013.  I wouldn’t rule them out, however, in the case Upton has decided the Mariners are closer to contention now than they were two years ago.  I’ve heard plenty of speculation that the Giants make a good fit for Upton, though it’s possible they’ll put their resources toward pitching.

Nationals GM Mike Rizzo was the scouting director when the Diamondbacks drafted Upton first overall, but a reunion would require moving Jayson Werth to right field and Bryce Harper to center.   It’s unclear whether they’d be interested in doing so.  The Dodgers have almost $40MM tied up in Carl Crawford and Andre Ethier next year.  Trading one of them and signing Upton (not necessarily in that order) is plausible.

The Tigers could have a spot for Upton, but they seem likely to focus on starting pitching.  Same goes for the Red Sox, who would also have to move an outfielder like Jackie Bradley to make room.  The Angels, Astros, and Blue Jays could seek a left field upgrade this winter, but may prefer a left-handed hitter.  The Jays, as well as the Indians, were on Upton’s four-team no-trade list last winter.  The Indians would likely face budget restraints with Upton, and may not want to bring him on as a right fielder anyway.

The Royals could have an opening in left field if Alex Gordon departs, but they’ve never committed more than $55MM to a player.  The Cardinals have plenty of in-house replacements if Jason Heyward departs.  The Mets are a tough match even if Cespedes leaves, with Curtis Granderson and Michael Conforto at the corners.  The Cubs also have more of a need at center field.  The Phillies have little in place at the outfield corners and could afford Upton, but it would be odd for a rebuilding club and a tough sell for the player.

Given his age, an opt-out clause should be a consideration for Upton.  Agent Larry Reynolds would do well to get his client another crack at free agency at age 30 or 31, as no one would be surprised if Upton takes his game to another level and hits 40 home runs at some point.  If an opt-out clause is obtained by Reynolds, I’d expect the total dollars to be reduced as a concession.

Coming off an inferior season to Chris Davis and Yoenis Cespedes, I’d expect Upton to receive a slightly lower average annual value.  Plus, Upton’s age gives him a chance at a seventh year, which may also bring down the AAV.  Something in the $20-22MM range could work.  The end result might put all three players at a similar grand total.  I’m putting Upton down for a seven-year, $147MM contract.