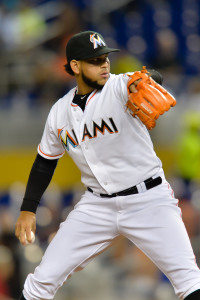 The decision comes as somewhat of a surprise but seemingly indicates that the Marlins aren’t fully convinced that Alvarez will be able to contribute in 2016 as he recovers from right shoulder surgery that he underwent back in late July. Indications in September were that the Marlins felt comfortable tendering Alvarez, who projected to earn $4MM this year (per MLBTR contributor Matt Swartz), a contract for the 2016 season. However, recent reports have suggested that the team was no longer certain that would be the case, as Alvarez’s injury was expected to keep him out at least into the first month of the season.

Despite questions surrounding the health of his shoulder, Alvarez figures to draw widespread interest on the free-agent market. He’s still just 25 years of age (26 in April) and pitched to a sparkling 2.98 ERA with 5.2 K/9, 1.9 BB/9 and a 53.6 percent ground-ball rate from 2013-14 when healthy in Miami (including a a no-hitter on the final day of the season in 2013).

Alvarez has just over four years of big league service under his belt, meaning that any club which signs him to a big league deal will be able to control him for not only the 2016 season but also the 2017 campaign, via the arbitration process. Alvarez has never been one to miss many bats, but he’s a well-regarded arm that could certainly slot into the middle of a big league rotation, so long as his shoulder allows him to do so.