The Rockies have officially announced a three-year, $27.5MM deal with outfielder Gerardo Parra. The contract includes a club option for a fourth year at $12MM, which comes with a $1.5MM buyout. 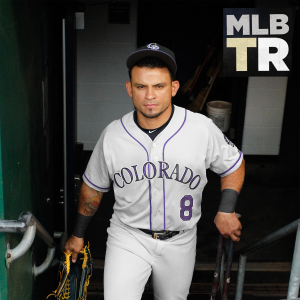 In Parra, who’ll turn 29 early in the season, the Rox will pick up a young, athletic player whose performance has been somewhat difficult to judge. As I explained in late August of last year, a huge first-half performance (combined with his age) made a four-year guarantee and/or ten-plus-million AAV seem plausible at one point.

But Parra tailed off down the stretch, ending the year with a .291/.328/.452 slash. That’s still good, of course, but is hardly the breakout that had seemed in the offing as of late summer. And he’s been more of an average to slightly-below-average offensive producer for most of his career. It’s worth noting, too, that the left-handed-hitting Parra has also tended to carry significant platoon splits.

It’s at least as hard to peg Parra from a defensive perspective. He became something of a sabermetric darling back in 2013, when he turned in a monster year with the glove (29.5 UZR, 41 DRS). That had followed several years of above-average metrics, seeming to suggest that Parra was one of the game’s best corner outfielders (if not also a good center fielder as well). But both of those major defensive rating systems have identified a significant drop-off in each of the last two seasons, with Parra rating as a well-below-average performer last season.

Ultimately, the contract comes in just shy of the three-year, $27MM prediction made by MLBTR’s Tim Dierkes before the hot stove kicked into gear this winter. While Parra always seemed to occupy a nice niche in this market, drawing wide appeal with his sturdy reputation and lower price tag, it is still notable that he was able to meet expectations despite the fact that the position-player market has been slow to develop.

Obviously, it’s an interesting strategy for Colorado to pursue, as the team could certainly have relied on its in-house options for the coming season. Parra will join a depth chart that already features left-handed-hitting outfielders Carlos Gonzalez, Charlie Blackmon, and Corey Dickerson, possibly suggesting that one of those players could end up on the move. Certainly, it’s not a minor signing for this organization, which hadn’t given out a deal of this magnitude since the pre-2012 Michael Cuddyer contract.

Signing a replacement for one of the team’s incumbent bats, in concert with a trade to acquire pitching, has long seemed an intriguing possibility, and it could be that GM Jeff Bridich is employing just such an approach here. He addressed that general concept in a recent interview on the MLBTR Podcast (at about the 13-minute mark), saying that it could be “part of a strategy” but noting that it’s still “incumbent upon us to know when a good baseball trade is a good baseball trade” — regardless of which direction the pitchers and position players were headed.