The Astros have requested unconditional release waivers on outfielder Carlos Gomez, who had recently been designated for assignment, tweets MLB.com’s Brian McTaggart. Though Houston was said at one point to be likely to reach a deal to trade the former star, he’ll instead hit the open market in 48 hours, assuming no team claims the $2.21MM he is owed through season’s end. 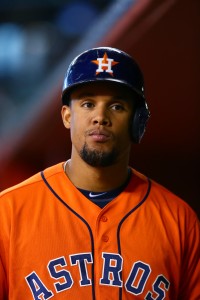 With the move, Gomez’s disappointing tenure with the Astros officially ends. Acquired to provide a major boost to the organization just over one year ago, he ultimately contributed a meager .221/.277/.342 batting line in 486 plate appearances.

That represented an unbelievable fall-off given the 30-year-old’s recent track record. Though his numbers were down a bit early in 2015, he was coming off of a two-year run in which he slashed .284/.347/.491 and launched 47 home runs with 74 steals in 1,234 plate appearances. That was all the more impressive given Gomez’s excellent defensive metrics in center.

All told, at the time of the deal, he seemed to be one of the better all-around players in all of baseball. With one more year of control (2016) then left on Gomez’s highly affordable contract at the time, Houston GM Jeff Luhnow elected to part with four quality prospects to add Gomez and righty Mike Fiers.

It remains to be seen what will come next for Gomez, who not long ago seemed set for a monster contract in free agency after the present season. Instead, he’ll hit the open market early. The Cardinals and Mets had been said to have interest in his services, but recent reports have downplayed the likelihood of those landing spots. However with Giancarlo Stanton out for the year, the Marlins have been said to have interest and do appear to make for a good match.

Teams eyeing Gomez will probably be able to hang their hat on his still-useful outfield glove, which has fallen in defense metrics but remains playable in center. A signing, though, would mean a roll of the dice on his fading bat. Of course, once he clears release waivers Gomez can be had for nothing but the pro-rated portion of the league minimum — which amounts to roughly $125K — as Houston will cover the remainder of his $9MM salary.