The Cubs acquired reliever Joe Smith from the Angels, tweets ESPN’s Buster Olney.  The Halos will receive minor league pitcher Jesus Castillo from the Cubs, tweets Joel Sherman of the New York Post.  The Cubs have officially announced the deal. 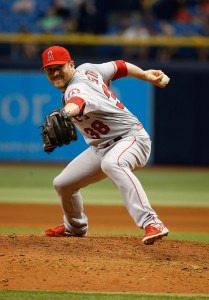 Smith, a 32-year-old righty, has been OK this year.  The veteran has a 3.82 ERA, 6.0 K/9, 3.1 BB/9, 0.96 HR/9, and 54.8% groundball rate in 37 2/3 innings, missing most of June due to a hamstring strain.  Smith has about $1.8MM remaining on his contract, after which he’ll be eligible for free agency.  He signed a three-year, $15.75MM deal with the Angels in November 2013 after a long, successful run with the Indians.  Unlike years past, the sidearming Smith has not been great against right-handed hitters in 2016.  It’s been a month of bullpen additions for the Cubs, who previously added Aroldis Chapman, Mike Montgomery, and Joe Nathan.

Castillo, 20, has posted a 3.27 ERA in seven starts for the Cubs’ Low-A affiliate this year.  The Cubs previously acquired Castillo from the Diamonbacks in the February 2013 Tony Campana trade.

In another deadline day deal, the Angels traded Hector Santiago and a minor leaguer to the Twins for Ricky Nolasco and Alex Meyer.