5:31pm: David O’Brien of the Atlanta Journal-Constitution tweets that Collmenter is actually more likely to help the Braves’ Major League roster and could even draw a start for the Braves on Saturday. With right-hander Williams Perez sidelined by an elbow impingement after a pair of rough starts earlier this month (via O’Brien on Twitter), it seems that Collmenter will be a depth piece at the big league level.

Collmenter entered the season with exactly five years of service time and won’t reach the requisite 172 days to move up to six years of MLB service time, so he can be controlled through the 2017 season via arbitration if the Braves wish. 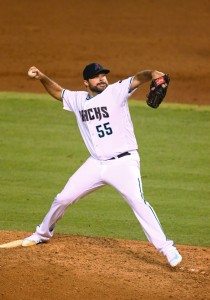 The 30-year-old Collmenter was the Diamondbacks’ Opening Day starter as recently as 2015 but lost his rotation spot after a poor start to that season. Collmenter thrived in a bullpen role for his final 52 innings in 2015 and remained in the ’pen to open the 2016 campaign. (The offseason additions of Zack Greinke and Shelby Miller and the return of Patrick Corbin from the disabled list all but closed the door on a return to the rotation.) In 22 1/3 innings of relief work this season, however, Collmenter labored to a 4.84 ERA and was ultimately released by the D-backs. He went on to ink a minor league pact with the Cubs and posted a 2.25 ERA across 16 Triple-A innings with his new organization, though his 9-to-8 K/BB ratio wasn’t especially encouraging.

Collmenter, like Wieland, will give Atlanta some pitching depth as the team’s Triple-A affiliate continues on in the playoffs. But, like Wieland, he’ll also be able to elect free agency at season’s end if he’s not added to the 40-man roster, so his time with the Braves organization could potentially be quite brief in nature.