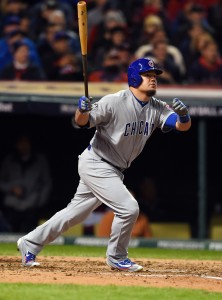 Kyle Schwarber returns: When Schwarber tore both the ACL and LCL in his left knee on April 7, the assumption was that the Cubs’ slugging catcher/outfielder wouldn’t be in their lineup again until 2017. Shockingly, though, Schwarber’s rehab went well enough that the team activated him prior to its World Series matchup against the Indians. Schwarber’s still not ready to play the field, but the 23-year-old’s best asset – his bat – has been a factor in the Fall Classic. Because the first two games took place in Cleveland, Schwarber was in the Cubs’ lineup as a designated hitter. He didn’t show much rust, going 3 for 7 with a double and two walks as the teams split at Progressive Field. Schwarber then came off the bench Friday at Wrigley Field, where Indians reliever Bryan Shaw retired him in an eighth-inning pinch-hit appearance. The Cubs dropped a 1-0 nail-biter and will try to pull even in Game 4 on Saturday.

Yoenis Cespedes will void his contract, but James Shields won’t: To the surprise of no one, Cespedes plans to opt out of the remaining two years and $47.5MM left on his deal with the Mets and become a free agent. Conversely, Shields, a White Sox right-hander, will not forgo the two years and $44MM remaining on his pact. Cespedes’ decision will become official within a three-day window after the World Series concludes. The Mets gave the outfielder an opt-out when they re-signed him last January to a three-year, $75MM contract, and having delivered another terrific season, he’ll once again test the open market. Given the weakness of the upcoming winter’s free agent class, the 31-year-old likely stands a better chance than any other soon-to-be available player to land a nine-figure contract. Shields also could have taken advantage of an underwhelming market had he enjoyed a strong year. Instead, the 34-year-old was among the worst starters in baseball this season, combining for a 5.85 ERA, 6.69 K/9 and 4.06 BB/9 in 181 2/3 innings with San Diego and Chicago.

Danny Salazar is back: After Salazar missed over a month with a forearm strain, the Indians activated the hard-throwing right-hander in advance of their series against the Cubs. Salazar’s return certainly wasn’t as unexpected as Schwarber’s, but he’s another quality piece for a pitching staff that has dominated throughout the postseason. Normally a starter, Salazar tossed a shutdown inning in relief in the Tribe’s 5-1 loss in Game 2. Aside from ace Corey Kluber, the Indians’ starters haven’t eaten many innings in the playoffs, so Salazar could end up as an important bullpen weapon as the World Series progresses.

Astros cancel their agreement with a top international prospect: The Astros and Cuban left-hander Cionel Perez struck a deal with a $5.15MM signing bonus in September, but the team voided it this week over a medical issue. Signing Perez would have actually cost the Astros $10.3MM, as they had already exceeded their spending allotment in this year’s international free agent class and would have had to pay a 100 percent overage tax.

Some news from around baseball…

The Diamondbacks are beginning the interview process to find their next manager, and broadcaster and former big leaguer Alex Cora will talk to the team this week about the position, Jon Heyman of FanRag Sports reports.  Cora has never managed or coached at any level in the majors or minors, though he received consideration for several recent managerial openings last offseason.  Cora interviewed with the Padres, Marlins and Nationals, and was also linked to the Mariners’ job in rumors.

The 41-year-old Cora gained a strong reputation as a teammate and student of the game during his 14-year playing career from 1998-2011.  Two of the six teams Cora played for during his career, Heyman notes, connect him with D’Backs GM Mike Hazen.  Cora played for the Indians and Red Sox from 2005-08, when Hazen was in Cleveland’s front office before joining the Red Sox in 2006.

In his post-playing career, Cora has worked as a radio and TV analyst for ESPN and ESPN Deportes since 2013, and also served as the general manager of Criollos de Caguas, his hometown team, in the Puerto Rican Baseball League.  Cora will be the GM for Puerto Rico’s team in the 2017 World Baseball Classic.

Cora is the first known candidate for the D’Backs job, as Hazen has indicated that he would like to talk to roughly 5-7 candidates before making a hire.  Red Sox bench coach Torey Lovullo has been heavily rumored as the favorite to be Arizona’s next skipper, with Heyman noting earlier today that “it would be an upset” if anyone but Lovullo was hired.

Roberto Perez already faced long odds to get to the big leagues as a 33rd-round draft pick for the Indians in 2008, though he faced another obstacle to both his career and general well-being when he suffered a Bell’s palsy attack in June 2013.  As Yahoo Sports’ Jeff Passan writes, Perez kept playing through his affliction, despite being unable to move the muscles on the left side of his face.  Thankfully, the catcher’s condition has improved since he began receiving thrice-weekly acupuncture treatments, and Perez has since made a place for himself in Cleveland postseason lore thanks to his two-homer performance in Game One of the World Series.  Here’s some more from around baseball…

Jon Heyman covers World Series news, a profile of Andrew Miller’s career and development into a relief ace and some hot stove items in his latest two columns for FanRag Sports…

The Giants have agreed to a minor-league deal to bring back outfielder/first baseman Kyle Blanks, Matt Eddy of Baseball America tweets. Blanks, 30, never suited up for San Francisco last year as he continued to deal with foot injuries.

With Angel Pagan and Gregor Blanco set to depart, the Giants have a need in left field. Though Blanks could theoretically share time there, it’s not clear whether he will be able to patrol the outfield grass at this stage. He could also conceivably challenge for a spot as a bench bat and could pick up some appearances at first base.

Blanks had seemed to have a good shot at earning a reserve role in San Francisco last spring, and he has exhibited real promise at times with the bat. He carries a solid lifetime .241/.322/.416 slash with 33 home runs over 933 MLB plate appearances. And Blanks has laid waste to Triple-A pitching. The biggest question remains whether he can stay healthy.

MLBTR offers its best wishes to former Dodgers GM Fred Claire, who is battling skin cancer that developed on his lip after a life in the sun at baseball diamonds. He spoke with JP Hoornstra of the Los Angeles News Group about his challenge and many fortunes in life, and it’s well worth a read. Claire has generously discussed his lengthy tenure with the Dodgers previously with MLBTR’s Zach Links. MLBTR wishes him our very best.

Here are a few notes from the western divisions: