The Athletics announced on Wednesday that they’ve signed free agent outfielder Matt Joyce to a two-year contract, which will reportedly guarantee him $11MM in total. Joyce will earn $5MM in 2017 and $6MM in 2018. 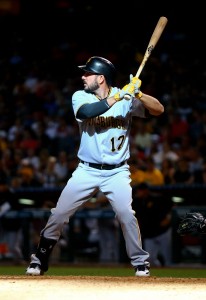 The 32-year-old Joyce spent the 2016 campaign with the Pirates and rebounded nicely from a terrible 2015 season with the Angels. In 293 plate appearances with Pittsburgh, the ACES client batted .242/.403/.463 with 13 homers, 10 doubles and a triple. Joyce has long struggled against left-handed pitching and was shielded from southpaws accordingly with Pittsburgh.

Oakland, a team that is known as one of the game’s most aggressive users of platoons, figures to deploy Joyce in a similar fashion. Joyce is a career .185/.265/.310 hitter against southpaws but has hit righties at a solid .252/.353/.449 clip. Though he’s never been a standout defender, his career ratings in both left field and right field (per Defensive Runs Saved and Ultimate Zone Rating) hover right around average.

For the A’s, Joyce fills a much-needed spot on the team’s outfield depth chart. The A’s entered the offseason with Khris Davis as their primary left fielder (though he could profile better as a designated hitter), but little else in the way of certainty on the outfield grass. Brett Eibner, Jake Smolinski and Matt Olson were among Oakland’s primary outfield options prior to the agreement with Joyce, who now figures to receive a fairly sizable chunk of playing time between the two corner spots. He could potentially form a platoon with the right-handed hitting Smolinski in one of the corners, but it stands to reason that Joyce is merely the first of what will be multiple outfield additions for president of baseball operations Billy Beane and general manager David Forst this winter.

Ken Rosenthal of FOX Sports reported the agreement and the terms (via Twitter). FanRag’s Jon Heyman tweeted the annual breakdown.