The Dodgers have finally found their next second baseman after a rumor-filled offseason, officially striking a deal with the Rays to acquire Logan Forsythe. Prized young righty Jose De Leon is heading to Tampa Bay in return in the 1-for-1 swap. 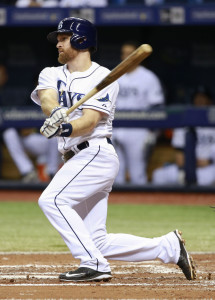 Los Angeles had, of course, long been said to be dangling De Leon as a headliner in talks with the Twins on Brian Dozier, with Minnesota holding out for more. The lack of progress in L.A.’s pursuit of Dozier seems to have spurred a renewed effort to look at alternatives. It has long been clear that the Dodgers wished to acquire a right-handed-hitting veteran to man second base, and it now seems that they’ve found their man.

Forsythe, who just turned 30, took off in the 2015 season and largely followed that up with a quality effort last year. All told, he owns a .273/.347/.444 batting line with 37 home runs in 1,182 plate appearances over the past two campaigns. Forsythe has typically rated as a solid fielder and baserunner, though Defensive Runs Saved was particularly fond (+8 runs) of his glovework in 2015. There’s added appeal in the fact that Forsythe can also play third, the corner outfield, and even shortstop in a pinch.

Those numbers dwarf Forsythe’s output over the prior four campaigns, though he did enjoy a productive 2012. In particular, his power surge has added a new element to his game. So long as he can keep that up, he figures to remain a solid regular over the final two years of his deal.

That contract, which the Rays wisely signed with Forsythe after his breakout 2015 season, promises him just $5.75MM for 2017. It also comes with an affordable option for 2018. The option price started at $8.5MM, but has already risen to $9MM based on escalators. It can moved another $1.5MM northward if Forsythe accumulates enough plate appearances. There’s a $1MM buyout, though that seems unlikely to be required.

For the Rays, this certainly looks to be a situation where the team saw an opportunity it couldn’t pass up. The organization has signed several veteran free agents this winter and obviously intends to compete. With Forsythe departing, players such as Nick Franklin, Tim Beckham, and perhaps Brad Miller appear to represent the top options at second for Tampa Bay, which certainly could look for an outside addition.

That the Rays believe in De Leon is further reflected in the fact that the organization already dealt away from its rotation depth in two notable recent trades (parting with Matt Moore and Drew Smyly). It’s certainly conceivable that De Leon or another starter could be moved in another swap, or the organization can enjoy a healthy rotation mix full of controllable, affordable arms.

The 24-year-old De Leon does indeed seem to have a bright future ahead of him. After ranking as a top-thirty prospect leaguewide entering the 2016 season, he battled through some injuries to earn his major league debut. Though he wasn’t terribly impressive in four MLB outings, De Leon laid waste to Triple-A hitters with 86 1/3 innings of 2.61 ERA ball with 11.6 K/9 and 2.1 BB/9.

There is some debate as to just how high a ceiling De Leon possesses, and his health and durability are still open questions, though there’s little doubt he’s expected to provide significant value in the near and long term. Parting with six years of control over the promising hurler no doubt represents a heavy price to pay, but Los Angeles clearly feels confident in the quality of its other young arms.