JANUARY 19: The Rangers have announced the one-year deal with Ross, who can earn up to $3MM in incentives, per Jeff Wilson of the Fort Worth Star-Telegram (via Twitter).

3:42pm: The Rangers have agreed with free-agent starter Tyson Ross, as Jeff Wade of 105.3 The FAN in Dallas/Fort Worth first reported. Ross’ contract is a one-year deal, per MLB.com’s T.R. Sullivan (Twitter link). Salary terms are not yet reported. 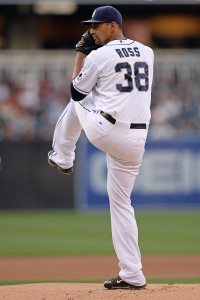 Ross is set to turn 30 in April and is coming off a season in which shoulder troubles limited him to one lone appearance — that which he made on Opening Day. Ross attempted to rehab the injury all season without success, ultimately undergoing surgery to alleviate thoracic outlet syndrome.

The Padres, not wishing to pay him a repeat of last year’s $9.6MM salary, non-tendered Ross last month. Nearly two-third of the league showed some level of interest in Ross as a free agent, but in recent weeks it’s been reported that the Rangers and Cubd were his two likeliest landing spots, with the Nats also floating on the periphery of his market.

Because of the aforementioned TOS surgery, Ross isn’t a lock to be ready for Opening Day. Durability concerns have long accompanied Ross, but prior to the 2016 season he’d been a largely healthy and effective starter atop the San Diego rotation. From 2013-15, Ross tossed 516 2/3 innings for the Padres, logging to a 3.07 earned run average with 9.2 K/9 against 3.5 BB/9 to go along with a superlative 58.2 percent ground-ball rate.

That level of upside is what led to the widespread interest in Ross and is what will likely lead the Rangers to plug him directly into their rotation once he’s healthy enough to take the hill. As it stands, A.J. Griffin is slotted in as the Rangers’ fifth starter behind Yu Darvish, Cole Hamels, Martin Perez and fellow offseason signee Andrew Cashner. However, Griffin tossed 119 innings with a 5.07 ERA last year and seems the likeliest to be ousted from the starting five once Ross completes his rehab. (Alternatively, the Rangers could deploy a six-man unit as a means of keeping everyone in the rotation healthy, though that’s simply speculation.)