2:31pm: It’s a one-year deal with a club option, per Paul Hoynes of the Plain Dealer (via Twitter).

1:55pm: The Indians have agreed to a deal with free-agent lefty Boone Logan, per Ken Rosenthal of FOX Sports (via Twitter). Terms remain unknown at this time; the deal is pending the results of a physical. 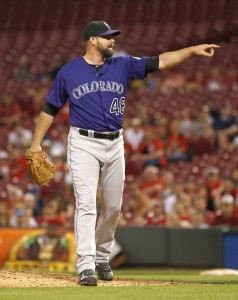 Logan, 32, has reportedly sought a two-year deal, with indications he’d be able to command that. Before the offseason, MLBTR predicted a two-year, $12MM contract for the veteran. He just wrapped up a three-year, $16.5MM pact with the Rockies that didn’t really pan out for the team, though Logan certainly ended his tenure in Colorado on a strong note.

The bigger issue, though, may be in his usage limitations. While he’s dominant against opposing southpaws, Logan isn’t nearly as effective against righties. Over 847 total plate appearances during his career, righty hitters own a .288/.376/.478 slash.

For the Indians, though, Logan still offers plenty of functionality. The club already has the dominant Andrew Miller available as the southpaw piece of a high-leverage mix that includes righties Cody Allen and Bryan Shaw. With those three arms already in place, skipper Terry Francona ought to have plenty of flexibility in deploying Logan to take full advantage of his skillset.