2:18pm: Salas will earn $3MM and can tack on an additional $350K in incentives, MLBTR’s Steve Adams reports on Twitter.

1:34pm: The Mets have reached an agreement to re-sign right-hander Fernando Salas, reports Ken Rosenthal of FOX Sports (on Twitter). Salas, a client of Paragon Sports, will receive a one-year deal, Rosenthal adds. The contract is pending a physical. 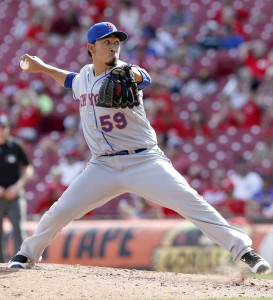 The 31-year-old Salas opened the 2016 season with the Angels and posted fairly uninspiring results through 56 1/3 innings there, logging a 4.47 ERA with 7.2 K/9 against 3.0 BB/9 in what was his third season with the Halos. However, Salas was dominant following an August trade to the Mets, allowing just four runs in 17 1/3 innings (2.08 ERA) with 19 strikeouts and zero walks. He’ll now return to the Mets for a second season, joining Addison Reed as a right-handed bridge to closer Jeurys Familia.

Of course, Salas also will play a larger role with the Mets early in the season, as Familia figures to be suspended under Major League Baseball’s domestic violence policy. With Familia on the restricted list, Reed seems likely to close, which could make Salas the primary setup man for manager Terry Collins for a portion of the season.

Much of the chatter surrounding the Mets and their desire to add a relief pitcher have centered around lefties — specifically former Met Jerry Blevins. New York has been said to be working with some financial constraints as their payroll approaches $150MM, but Newsday’s Marc Carig reports that the team is not yet out on Blevins (Twitter link).

Salas, for what it’s worth, has held opposing lefties to a .239/.294/.383 batting line in his career and limited lefties to a .237/.270/.412 slash in 2016. So, while not utterly dominant against opposite-handed batters, he does limit lefties more effectively than a number of right-handed middle relievers.