The Red Sox have struck a deal to acquire fleet-footed outfielder Rajai Davis from the Athletics, the teams announced on Tuesday night. Minor league outfielder Rafael Rincones is going back to the A’s in exchange, and Boston has designated first baseman/outfielder Steve Selsky to clear a 40-man roster spot. Davis had previously ranked eighth on MLBTR’s most recent list of the top August trade candidates. 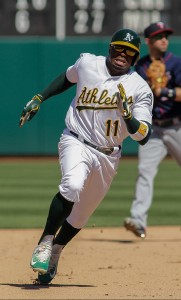 The 36-year-old Davis had a slow first half to the season but has been on fire since the All-Star break, hitting .303/.361/.487 with three homers and 11 steals (in 13 attempts). Overall, he’s stolen 26 bases in 32 attempts. Davis will give Boston a huge boost in terms of speed in the season’s final month as well as in the postseason — both times when clubs are more likely to carry pinch-running specialists.

Of course, Davis’ second-half production and his respectable .255/.319/.396 slash against left-handed pitching illustrate that he brings far more to the table than just his wheels. He’ll also give the Sox a veteran outfield option capable of playing all three spots while Jackie Bradley sits out for the next week-plus due to a sprained thumb.

Davis brings to the Red Sox a history of speed and performing well against left-handed pitching. The veteran outfielder has five seasons of 40-plus steals under his belt, including a 43-steal campaign in 2016 that paced the American League. He’s also a career .285/.341/.434 hitter when holding the platoon advantage; His most memorable hit against a lefty provided one of the most dramatic moments in recent postseason history, when he took Cubs closer Aroldis Chapman deep in Game 7 of the 2016 World Series.

Davis signed a one-year deal worth $6MM to return to Oakland for his second stint with the A’s this past offseason, and he’s still owed the balance of that salary — a sum of approximately $1.28MM.

Rincones turned 18 on July 1 and has spent the first two seasons of his professional career playing for the Red Sox’ affiliate in the Dominican Summer League. Through 380 plate appearances, the switch-hitting Rincones has batted .267/.386/.368 with a pair of homers, 18 doubles, four triples and 14 steals (in 19 attempts).

Nick Cafardo of the Boston Globe and Ken Rosenthal of The Athletic had both previously reported that the Red Sox were nearing a trade or waiver claim, and Rosenthal added that Selsky had been designated for assignment. CSN New England’s Evan Drellich first reported that Davis was going to Boston (on Twitter). Susan Slusser of the San Francisco Chronicle tweeted that it was a trade, not a waiver claim, and she was also the first to report that the A’s were acquiring Rincones (Twitter link).