The Padres have announced an extension with lefty Clayton Richard, who had been slated to return to free agency. It’s a two-year deal with a $6MM guarantee and “minor” incentives, MLB.com’s AJ Cassavell reports on Twitter. 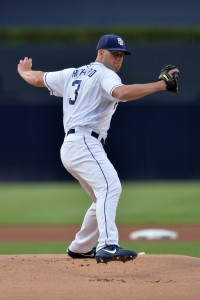 Since signing a one-year, $1.75MM deal over the winter, the 34-year-old Richard has operated as a full-time starter for the first time since 2012. While he carries only a 4.82 ERA, some underlying metrics suggest he has deserved better. Richard has recorded 6.6 K/9 and 2.7 BB/9 to go with a stellar 59.1% groundball rate. He has likely been at least a bit unfortunate to surrender a .348 batting average on balls put in play against him. And while Richard has been hurt by the long ball — he’s coughing up dingers on 19.7% of the flyballs hit against him — he has typically fared much better in that regard.

It’s uncertain whether Richard can sustain his promising showing, but he seems like a pretty reasonable pitcher to take a slight risk on. Richard’s two-seamer has averaged 90.7 mph, not far off his career average. And he has maintained last year’s surge in swinging-strike rate despite becoming a full-time starter; his 8.3% mark sits well above his 7.2% career level. Richard was quite productive while working mostly as a reliever in 2016 and certainly has shown an ability to succeed as a starter in the past; he posted sub-4.00 earned run averages for the Pads in that role in the 2010-12 seasons. Of course, Richard also has a history of shoulder problems that required surgical treatment.

For the Pads, locking up Richard now accounts for another rotation spot heading into the 2018 season. Youngsters Luis Perdomo and Dinelson Lamet seem quite likely to remain in the MLB staff and Travis Wood could still be an option despite his struggles. But with Jhoulys Chacin heading back to free agency, the Pads were looking at filling at least two openings.

Even with today’s move, the team could still add two rotation pieces over the offseason. Last year’s pursuit of budget-friendly veterans could be reprised; really, the Friars did quite well with Richard, Chacin, and Trevor Cahill, even if Jered Weaver proved to be a miss.

Whether or not it’ll make sense for the Padres to keep Richard in the rotation throughout the life of the deal will have to be seen. But he could have plenty of function regardless. The veteran southpaw could always slide back into a long relief or situational lefty role if others ultimately prove to be better starting options.