The Brewers announced Thursday that they’ve re-signed infielder Eric Sogard to a one-year, Major League contract. Sogard had been set to hit free agency but will instead return to the Brewers rather than test the open market. 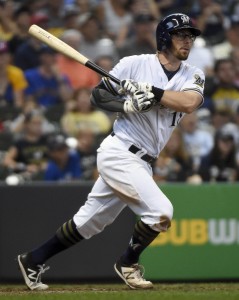 Sogard will receive a guarantee of $2.4MM plus $650K worth of possible incentives. That includes $150K apiece upon playing in his 30th, 50th, 70th, and 90th games as well as another $50K if he raches 120 games played. Octagon brokered the deal on the player’s side.

Sogard, 31, inked a minor league deal with the Brewers last winter after missing the 2016 season due to knee surgery. The longtime A’s infielder came to Milwaukee with a reputation as a plus defender with a light bat but posted a career-year at the dish in 2017. After having his contract selected in mid-May, Sogard turned in a .273/.393/.378 batting line with three homers, 15 doubles and a triple over the life of 299 plate appearances.

Most of Sogard’s defensive reps came at second base with the Brewers, but he also played shortstop and third base in addition to logging eight innings in left field with Milwaukee. The knee injury that cost him the 2016 season didn’t appear to have any adverse effect on Sogard, as Defensive Runs Saved pegged his work at second base as five runs above average (in just 365 innings) and his glovework at shortstop at two runs above average (160 innings).

“Eric brings to the team a veteran presence who possesses the ability to play multiple positions and reach base at a high rate,” said general manager David Stearns in a press release announcing the move. “We are pleased to welcome Eric and his family back to Milwaukee for the 2018 season.”