NOV. 13: The Braves have issued a press release confirming the hire of Anthopoulos as their new executive vice president and general manager. Anthopoulos signed a four-year contract and will report directly to Braves CEO Terry McGuirk, per the release.

“The past few months have been the toughest in our storied history,” said McGuirk in a statement. “We are excited to have Alex lead our baseball operations team and begin a bright, new chapter for our organization. We chose Alex because he is of the highest character and has a wealth of MLB leadership experience.  He is one of the elite baseball executives in our industry and is the perfect person to lead us to a World Series.”

Notably, too, the McGuirk’s statement offers some clarity on Hart’s role. The veteran executive “will relinquish his active involvement in baseball operations and will move into the role of senior advisor to the Atlanta Braves, effective immediately,” per the announcement.

NOV. 12: The Braves will hire Alex Anthopoulos as their new general manager, Joel Sherman of the New York Post reports (Twitter links).  The official announcement could come this week during the GM Meetings.  Anthopoulos will be the team’s final decision-maker in baseball-related matters, with John Hart remaining as the team’s president of baseball operations for now but in more of a “counsel/figurehead” type of capacity. 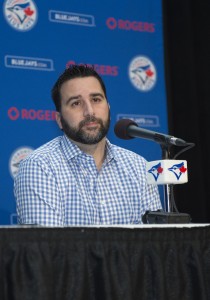 It was less than six weeks ago that Atlanta’s front office was thrown into disarray with the shocking resignations of former GM John Coppolella and international scouting director Gordon Blakely due to accusations that the team had violated international signing rules.  Major League Baseball is still conducting an investigation into the matter, which has now expanded to exploring possible misdeeds involving the signings of domestic amateurs in the draft.  It isn’t yet known how or when the league will issue its punishments towards the Braves, though the ruling is expected to be severe, given the reported scope of the charges.  Hart apparently won’t face any punishment from the league, though he has seemingly lost his previous role atop Atlanta’s baseball operations department.  Hart’s contract expired after the season and it remains to be seen if he’ll continue in this apparently reduced role or if he could depart for another job elsewhere.

Royals GM Dayton Moore (who spent more than 11 years working in the Braves front office) was considered to be the team’s first choice for the job, though Royals owner David Glass denied the Braves permission to speak to his general manager, and it wasn’t clear how interested Moore actually was in a return to Atlanta.  The Braves were clearly focused on adding an experienced GM to help lead the team through the uncertainty of the MLB investigation, as Nationals assistant GM Doug Harris was the only reported candidate who hadn’t previously run a Major League front office.  Beyond Anthopoulos and Moore, other names under consideration included Jim Hendry, Ben Cherington, Dan O’Dowd, Josh Byrnes, and Dan Jennings.

Still just 40 years old, Anthopoulos brings a wealth of front office experience to Atlanta.  The Montreal native spent almost a decade in scouting roles with the Expos and Blue Jays and then served as the Jays’ assistant GM before being named Toronto’s general manager in October 2009.  Thought to be taking over a rebuilding team (his first major move was trading Roy Halladay to the Phillies), Anthopoulos shifted direction once Jose Bautista unexpectedly emerged as a top slugger in 2010, and his tenure was marked by bold and often surprising transactions.

Anthopoulos’ successes included the team-friendly extensions for Bautista and Edwin Encarnacion, trading Vernon Wells’ seemingly immovable contract to the Angels, the acquisition of Josh Donaldson from the Athletics, and the twin blockbuster deals at the 2015 July non-waiver trade deadline that brought David Price and Troy Tulowitzki to Toronto.  The 2015 team ended up as Anthopoulos’ crowning achievement, as the Jays ended a 22-year postseason drought by winning the AL East and then advancing to the ALCS.

It was just after that season, however, that Anthopoulos left the Jays’ GM job, finishing out his contract after rejecting a pair of extension offers.  Mark Shapiro had been hired as the Blue Jays’ new team president and CEO midway through the 2015 season, and Anthopoulos had no interest continuing in what essentially would have been a lesser role in the team’s baseball ops department, with Shapiro now calling the shots.  Anthopoulos has spent the last two seasons working as the Dodgers’ VP of baseball operations.

Anthopoulos will now again take the reins of a rebuilding team, though the Braves may also be somewhat close to respectability given the amount of proven (Freddie Freeman, Ender Inciarte, Julio Teheran, Arodys Vizcaino) and on-the-cusp of a breakout (Ozzie Albies, Dansby Swanson) talent on the big league roster.  The Braves also boast arguably the best farm system in baseball, including ready-to-debut outfielder Ronald Acuna and top prospect Kevin Maitan (though Maitan’s own signing as an international amateur has been scrutinized by MLB’s investigation).