1:17pm: The Pirates are sending the Rays $1MM as part of the trade, reports Rob Biertempfel of The Athletic (Twitter link). In essence, then, they’ll spend an additional $1.45MM to turn Hudson into Dickerson, while the Rays will add a reliever to their ’pen, a prospect to the lower levels of their farm system, and trim $1.45MM from their 2018 payroll. 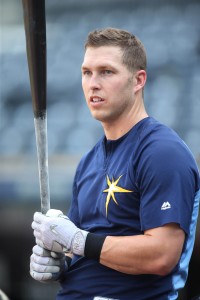 Tampa Bay recently designated Dickerson, 28, for assignment in a move that came as a surprise to many. Dickerson posted solid overall numbers in 2017, hitting .282/.325/.490 with 27 homers in 629 trips to the plate. Dickerson, though, faded badly after a strong start to the season.

Though Dickerson hit .326/.369/.570 with 17 homers through the season’s first three months, that production was supported by a .374 BABIP that he didn’t seem especially likely to maintain. That number came back down to earth from July through season’s end as Dickerson’s strikeout rate rose to nearly 29 percent, and he batted just .232/.273/.397 with 10 homers and an 82-to-16 K/BB ratio in the final three months of the season.

That said, Dickerson still has an overall track record as a quality bat, as evidenced by a lifetime .280/.325/.504 slash and 119 OPS+. He’ll earn $5.95MM in 2018 and is controllable for one more year via arbitration before he can reach free agency.

The Pirates desperately needed some outfield help following this offseason’s trade of former face of the franchise Andrew McCutchen, and Dickerson should slot into the organization as the team’s new everyday left fielder. Defensive metrics aren’t exactly bullish on his glovework in the outfield, though he’s graded out as generally average or slightly above-average in left field over the past two seasons after drawing poor marks early in his career with the Rockies. He’ll be joined in the outfield by Starling Marte and Gregory Polanco, each of whom is looking to bounce back from a disappointing 2017 season.

Though Dickerson isn’t likely to recreate the massive performance he rode to his first career All-Star appearance in the first half last season, he should nonetheless serve as an offensive upgrade over the Pirates’ internal options in left field. Adam Frazier and Jordan Luplow were two of the main candidates for that gig on the 40-man roster, while veterans Michael Saunders and Daniel Nava are in camp as non-roster invitees to Spring Training. Certainly, the Dickerson pickup places a significant roadblock to either veteran making the roster, and it’s fair to wonder if they’ll ultimately be allowed to seek other opportunities. 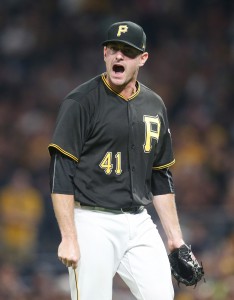 In Hudson, the Rays will pick up a hard-throwing veteran reliever looking for a rebound season of his own. Hudson’s contract calls for him to earn $5.5MM this season, so the two contracts nearly cancel each other out. However, the Pirates are also sending cash to the Rays in the deal, so it appears that Tampa Bay will come out ahead, financially speaking, in the swap.

Hudson, 31 early next month, posted a 4.38 ERA with 9.6 K/9, 4.8 BB/9, 1.02 HR/9 and a 43.3 percent ground-ball rate while averaging 95.6 mph on his fastball through 61 2/3 innings last year. A converted starter that has twice undergone Tommy John surgery in his career, Hudson has a 4.59 ERA in the ’pen over the past three-plus seasons since making the switch, but secondary metrics have been considerably more optimistic based on his strikeout rates and, outside of last season, his control. In 192 1/3 frames as a reliever, Hudson has a 3.84 FIP and 3.78 SIERA.

Tampa Bay executives Erik Neander and Chaim Bloom recently downplayed the possibility of the Rays trading closer Alex Colome before the season begins, so it seems that Hudson will pair with recently re-signed Sergio Romo to give the Rays another experienced arm in their setup corps.

The addition of that pair of veteran arms will allow the Rays to lean less heavily on what had looked to be a largely inexperienced group of relievers outside of Colome and southpaw Dan Jennings. Andrew Kittredge, Chaz Roe, Austin Pruitt, Ryne Stanek, Jose Alvarado and Chih-Wei Hu wiill be among the names vying for the remaining bullpen spots with the Rays this spring now that Hudson is on board.

Gray, meanwhile, was Pittsburgh’s 13th-round pick in last year’s draft and posted a .269/.329/.486 slash with seven homers and five steals in 53 games for the Pirates’ short-season Class-A affiliate last year. The second baseman was an honorable mention on Fangraphs’ list of the Pirates’ Top 25 prospects, with Eric Longenhagen pointing to a long track record of production as an amateur but also labeling his overall offensive profile as “middling.”

All told, it’s a fairly underwhelming return for Dickerson, though that’s largely indicative of the manner in which bat-first corner outfielders have been devalued in the current economic climate of baseball. The Rays surely tried to trade Dickerson for much of the winter but seemingly found no takers before designating him for assignment, and even in this swap it seems that Tampa Bay had to agree to take on some salary to work out a deal. Jay Bruce managed to score a three-year, $39MM pact with a similar, albeit superior overall profile at the plate, but both the trade and free-agent markets for good-not-great corner outfielders have been rather tepid over the past couple of seasons.

It seems plausible that the Rays simply felt they could utilize a full season of Mallex Smith in a corner outfield spot without losing much in the way of overall value, and elected to turn Dickerson into an alternative Major League asset. The surprising trade of Steven Souza that followed Dickerson’s DFA, as the Rays’ front office told it recently, was more or less a function of an unexpected and aggressive pursuit of Souza by the Diamondbacks, who promised a prospect package the Rays felt they could not afford to turn away. The Rays were then able to capitalize on a weak free-agent market and bring in Carlos Gomez at a bargain rate — a move that further reflects the dwindling value of above-average offensive outfielders that aren’t premium defensive assets.