3:08pm: Liriano is officially a member of the Tigers.

12:44pm: The Tigers have agreed to a one-year, $4MM contract with lefty Francisco Liriano, reports FanRag’s Robert Murray (Twitter link). The deal also contains another $1MM in available incentives tied to significant awards, Jon Heyman of Fan Rag tweets. Murray had recently tweeted that the market for Liriano, a client of the Legacy Agency, was picking up some steam.

Liriano, 34, enjoyed a resurgence as a key member of the Pirates from 2013-15, somewhat quietly reestablishing himself as a considerably above-average big league starter. 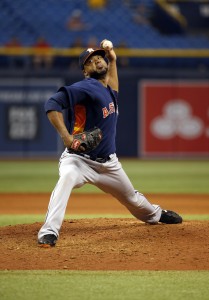 The past two seasons, though, have been another story. Liriano has bounced from Pittsburgh to Toronto to Houston, working to a combined 5.05 ERA through 260 innings as the control issues that hounded him earlier in his career resurfaced (4.8 BB/9, 1.3 HR/9). Accordingly, Liriano’s swinging-strike rate dropped to 11.4 percent in 2016 and 9.6 in 2017 — the worst marks of his career.

Liriano still averages better than 92 mph on his fastball and can induce grounders at an average or better rate. He also held lefties to a fairly feeble .247/.300/.355 slash last season, though one would typically prefer to see a bit more dominance against same-handed opponents when considering a pitcher as a left-handed specialist. It’s not clear at this time whether he’ll function as a starter or a reliever with his new club, though in his run with the Astros last season, he worked exclusively out of the bullpen.

At present, though, the Tigers certainly seem like a team that could use some rotation depth. Ace Michael Fulmer is coming off surgery to re-position the ulnar nerve in his pitching arm, while Jordan Zimmermann battled neck and back injuries in what was a dismal overall season in his second year with Detroit.

Young lefties Daniel Norris and Matt Boyd have yet to cement themselves as quality big league options, even though each has flashed potential on more than one occasion. And righty Mike Fiers, signed earlier this winter to be the fifth starter, is coming off a poor season himself, which led to a non-tender from the Astros. Longtime setup man Alex Wilson is being stretched out as a potential starter this spring as well, and veteran non-roster invitee Travis Wood could also vie for a starting spot.

If Liriano is used in relief, he’ll join Blaine Hardy and Daniel Stumpf as southpaws in a bullpen, where Wood could also compete for a spot. The current composition of the Tigers’ bullpen is thin beyond closer Shane Greene, to put things delicately. Jason Martinez of MLBTR and Roster Resource currently projects Wilson (assuming he doesn’t start), Drew VerHagen, Hardy, Stumpf, Joe Jimenez and Buck Farmer to round out the relief corps behind Greene. Johnny Barbato, Zac Reininger and Jairo Labourt are all 40-man options in Triple-A, while Wood, Enrique Burgos and Victor Alcantara headline the non-roster invitees competing for jobs this spring.

Liriano is a known commodity for much of the Tigers coaching staff, as first-year Detroit manager Ron Gardenhire served as his skipper from 2005-12 with the Twins. Tigers bullpen coach Rick Anderson was Liriano’s pitching coach during his Twins days, while bench coach Steve Liddle and quality control coach Joe Vavra were also on Gardenhire’s staff when Liriano was with Minnesota.