YESTERDAY: The Cardinals have announced an extension with shortstop Paul DeJong, as Derrick Goold of the St. Louis Post-Dispatch first reported. DeJong is represented by the C.L. Rocks Corporation.

DeJong will be guaranteed $26MM over a six-year term, FanRag’s Jon Heyman reports (Twitter links). That includes $2MM in buyouts for a pair of club options that, per Goold, are valued at $12.5MM and $15MM, respectively. The $26MM guarantee on the extension breaks Tim Anderson’s record (six years, $25MM) for the largest sum ever guaranteed to a player with less than one full year of Major League service time. (Related: MLBTR Extension Tracker; Pre-Arb Extension Records). 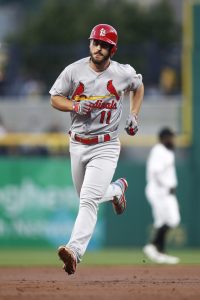 The 24-year-old DeJong debuted with little fanfare last summer but quickly thrust himself into the national spotlight with a terrific .285/.325/.532 slash line and 25 homers through just 443 plate appearances in 108 games.

DeJong spent a bit of time at second base but spent most of his rookie season at shortstop, where Defensive Runs Saved pegged him as an average defender and Ultimate Zone Rating graded him slightly above. In all, he was worth 2.7 rWAR and 3.0 fWAR in his debut season — a strong enough performance to land him second in the NL Rookie of the Year voting behind Cody Bellinger.

That strong rookie season wasn’t without its red flags, though, and DeJong will have some notable areas on which to focus for improvement in 2018 and beyond. Most significantly, the young slugger’s 28 percent strikeout rate and 4.7 percent walk rate each cast doubt on his ability to repeat his OBP and batting average, both of which were propped up to some extent by a .349 BABIP that looks poised for some regression. To his credit, DeJong did scale back his strikeouts and boost his walk rate over the season’s final five to six weeks, perhaps signaling that he’s already begun to make some adjustments. However, he’ll need to do so over the course of a full year to prove that this level of production is at least somewhat sustainable.

DeJong isn’t on track for Super Two status, so the Cardinals have bought out three pre-arbitration seasons and three arbitration years with today’s deal in exchange for control over his first two free-agent years. In doing so, they’ve bet a fair amount on DeJong remaining a productive cog in their infield for the foreseeable future. If he rewards that faith, however, the Cardinals will effectively control DeJong for the entirety of his prime without needing to pay for much, if any, of his decline phase. The guaranteed portion of the contract runs through DeJong’s age-29 campaign, while the two option years cover his age-30 and age-31 seasons.

From DeJong’s vantage point, he’ll now obtain his first baseball fortune three years ahead of schedule. The former fourth-round pick received a $200K signing bonus out of Illinois State in the 2015 draft but wouldn’t have been eligible for arbitration until after the 2020 season. He’ll sacrifice some earning power down the line as a would-be 30-year-old free agent, though that’s the trade-off that virtually all young players make when locking in this type of financial security well in advance.

Early extensions of this nature have become a hallmark of the Cardinals’ front office, though the success rate on such long-term deals probably hasn’t been as high as president of baseball operations John Mozeliak and GM Mike Girsch would like. The Cards have done well thus far in long-term arrangements with Carlos Martinez and Matt Carpenter. However, last year’s extension with Stephen Piscotty didn’t pay dividends as the team hoped — he’s since been traded to Oakland — nor did Allen Craig’s five-year deal (although the Cards were able to trade him before thatdeal imploded). The jury is still out on Kolten Wong’s five-year, $25.5MM deal, though Wong rebuilt his value last season after a poor 2016 campaign.