TODAY: The deal is now official.

YESTERDAY, 4:26pm: Zach Buchanan of The Athletic has tweeted the full breakdown. Marte will receive a $2MM signing bonus and $1MM salary for the coming season, followed by $2MM, $4MM, $6MM, and $8MM salaries through the guaranteed seasons (2019-22).

The options are valued at $10MM and $12MM, each of which come with a $1MM buyout. Incentives (details of which remain unknown) could tack on another $4MM overall.

11:41am: The Diamondbacks have agreed to a five-year, $24MM extension with middle infielder Ketel Marte, Robert Murray of FanRag reports. The deal also comes with a pair of option years worth a combined $22MM, which could make it a seven-year, $46MM pact. Marte is a client of the Legacy Agency. 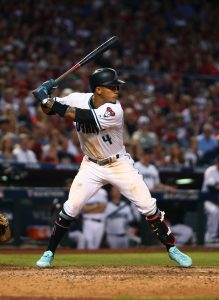 The Diamondbacks already had Marte under control for the next half-decade, including four arbitration-eligible years, but the extension means they won’t go through that process at all with him. The Phillies made a similar decision Sunday when they signed infielder/outfielder Scott Kingery to a five-year, $24MM guarantee of his own.

The 24-year-old Marte is about to begin his second season in Arizona, which acquired him from Seattle in a blockbuster November 2016 trade. Because the deal also featured Taijuan Walker, Jean Segura and Mitch Haniger, Marte flew under the radar at the time, especially after enduring a rough 2016 with the Mariners. Marte impressed his new team last year, however, even though he didn’t post eye-popping offensive numbers in the majors.

After spending nearly the first three months of 2017 at the Triple-A level, where he raked over 338 plate appearances (.338/.391/.514 – good for a 135 wRC+), the Diamondbacks promoted Marte in late June. The switch-hitter went on to bat .260/.345/.395 (89 wRC+) with five home runs and three stolen bases in 255 PAs. To his credit, Marte collected nearly as many walks (29) as strikeouts (37), and as Jeff Sullivan of FanGraphs wrote in December, there’s data suggesting he could be in line for a breakout. Marte was somewhat of a Statcast darling last year, evidenced by his 19th-place ranking in sprint speed and a quality xwOBA (.342).

While Marte’s only a .265/.319/.361 hitter (84 wRC+) with eight homers and 22 steals in 968 major league PAs, the D-backs seem optimistic he’s indeed capable of more in their uniform. And they saw him fare nicely in the field last season, where he logged four Defensive Runs Saved and a 1.1 Ultimate Zone Rating in 507 innings at shortstop. Marte’s now likely to give up short in favor of Nick Ahmed, a gifted defender who missed most of last season, and move to second. It’ll be a relatively new position in the bigs for Marte, who hasn’t lined up at the keystone since logging 31 innings there as a rookie in 2015.